Back in 2008, the federal government created the Nááts'ihch'oh (Porcupine in Dene) National Park Reserve.  Since then, Parks Canada has been actively promoting the virtues of the Nahanni's' shy cousin as an adventure destination.

In particular, the have created a glossy trip planner brochure that they publish every year.
Packrafters are always looking for fresh new lines, and the images and description of the rivers and mountains in Nááts'ihch'oh captivated us.  These same images captivated others as well, but more on that later.
In particular, Black Wolf creek was a standout, with no information available anywhere, other than it looked amazing.  Black Wolf creek drains into the Broken Skull (how cool a name is THAT!) river just upstream of its confluence with the renowned South Nahanni.  Access is to get ones butt to Grizzly lake, about 10km hike for the Broken Skull, or, alternatively, drain the bank account and fly.
All winter we (we being the usual suspects of Anthony, Paul B, Sky and Dylan) schemed on various route link-ups we could use to explore Nááts'ihch'oh and access the Black Wolf for the coveted first descent (well, we assumed FD).
Well, as the Stones said, you can't always get what you want, but sometimes, you get what you need.
Word reached us that a marauding group of Americans had their eyes on the Black Wolf as well, and were scheduled to hit it a month before us.  The nerve!  They steal our first round draft picks, and now OUR FDs!
All joking aside, they had a great trip and lots of adventure.  I didn't meet them, but they had beers here in Whitehorse with the other members of our trip prior to their departure.  They took a very different route than we did to access the Black Wolf.  Indeed, for both of our trips, the Black Wolf ended up being more of a parenthesis to the trip rather than the main topic.  It would be cool to have some beers with them now and compare notes.
In the end, our route boiled down to the following: 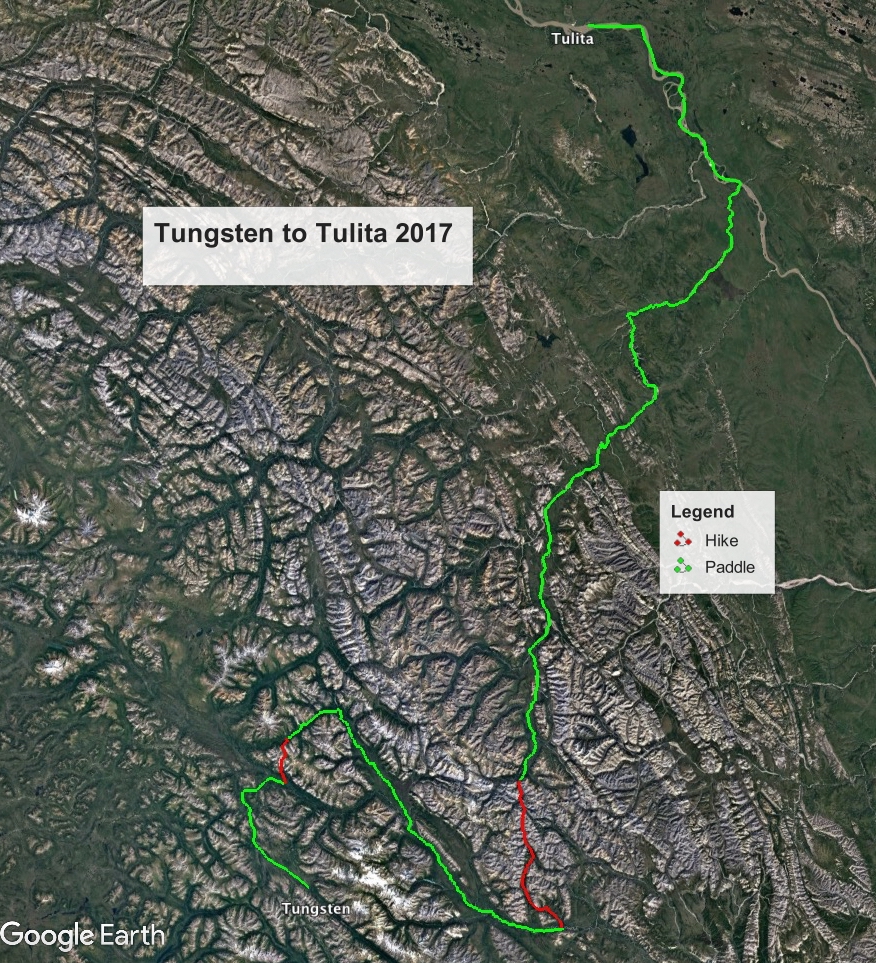 All in all, we had 736 kms to cover: 100 or so hiking and the rest paddling, or some semblance of.
We reckoned 21 days would do it, so thats how much food we took.  Ultimately, flooding rivers in the NT kicked us out of the mountains faster than we had anticipated and we took 17 days.
We elected to go without a resupply and carry it all, just to see how it would go.
July 15th was departure day, and Anthony (who in the end couldn't come along) stepped up to the plate and belted it out of the park by volunteering to drive our vehicle back to Whitehorse from Tungsten, thereby eliminating a major logistical hurdle for us.
We rolled out of town Friday afternoon, had a burger at Rancheria lodge (worthy!) and camped at the Hyland river campground on the CanTung road.  The mosquitoes were horrendous and we were all super relieved to have brought the bug liners for the HMG Ultamids.  HMG was super stoked on our trip, and gave us a whack of their gear to check out, including Ultamid 4s with bug liners, tarps, 4400 Porter packs and some other goodies.  I don't know if we really deserved their largesse, but, we certainly appreciated having this top notch equipment.  If you haven't tried their gear, you should.  Well designed and well executed is just the tip of their iceberg.
Ultimately, this was, for myself anyhow, a trip of a lifetime.  Hopefully not THE trip of my lifetime.
Perhaps better described as an ultimate trip, of which I hope there will be more.
Trips like this ultimately only come off when everything comes together perfectly.  Most importantly, what has to come together is a perfect group.  We had that in spades.
Travelling with Dylan, Paul B and Sky is always a great experience. 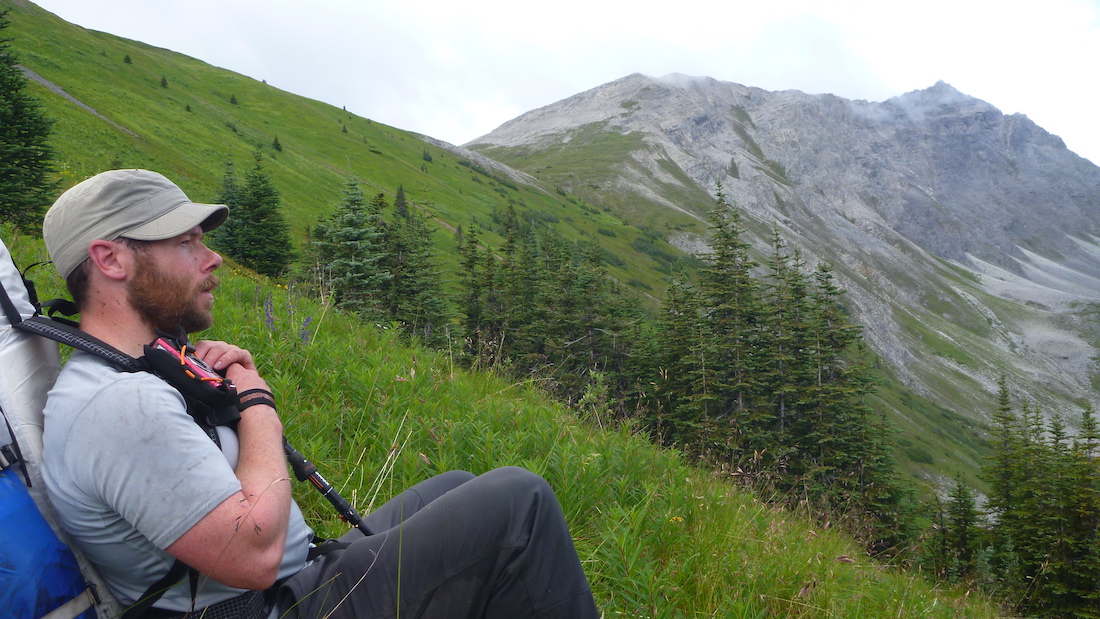 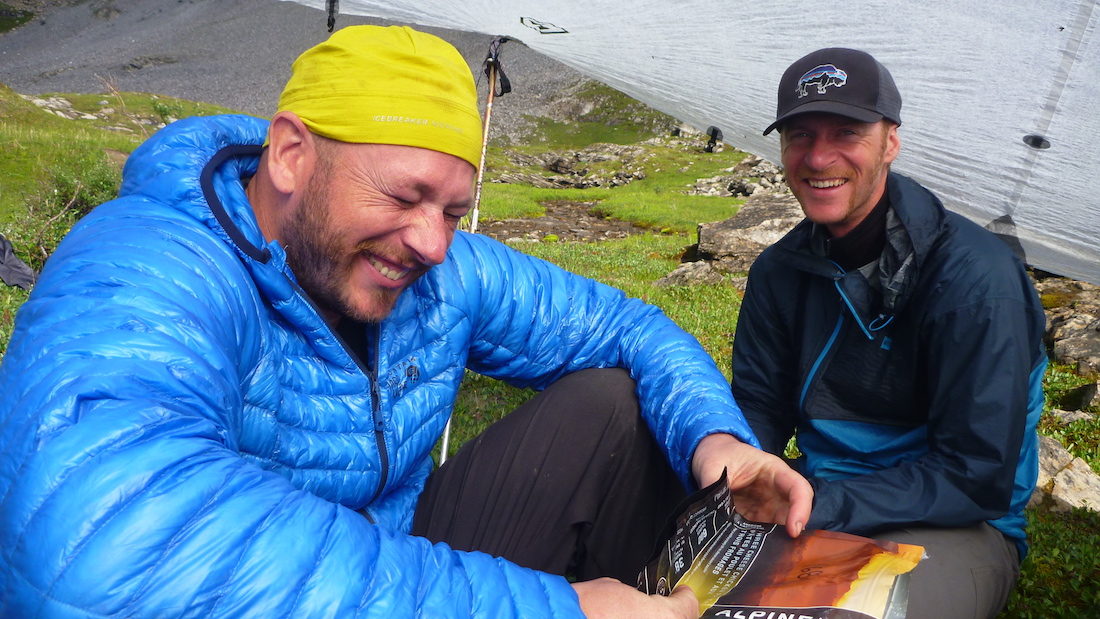 Given the length of the trip, I have broken it down into parts I to V.
Hope you enjoy the posts.  There will be a video at some point.  Paul B will also be posting another excellent account on his Exposure site at some point.

Posted by Paul Christensen at 1:21 PM