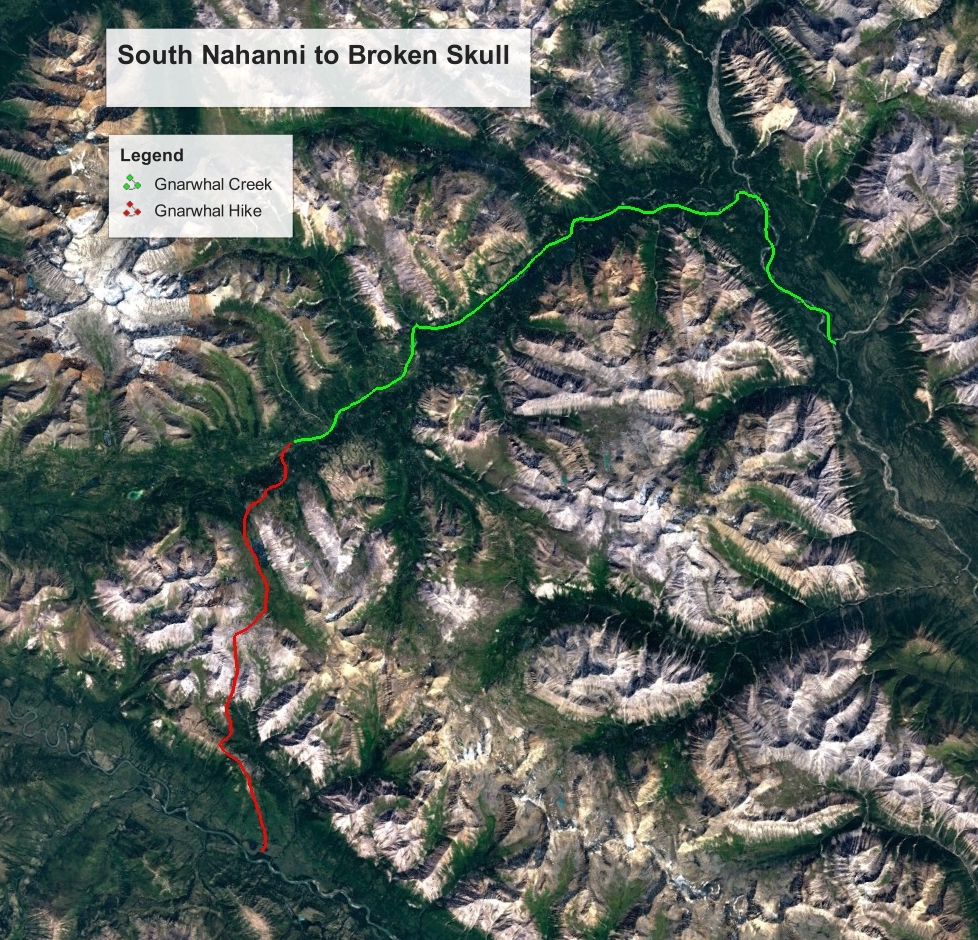 We had a quick brew up on the creeks gravelly mouth, packed up and shouldered the beasts to begin the trek to the Broken Skull. 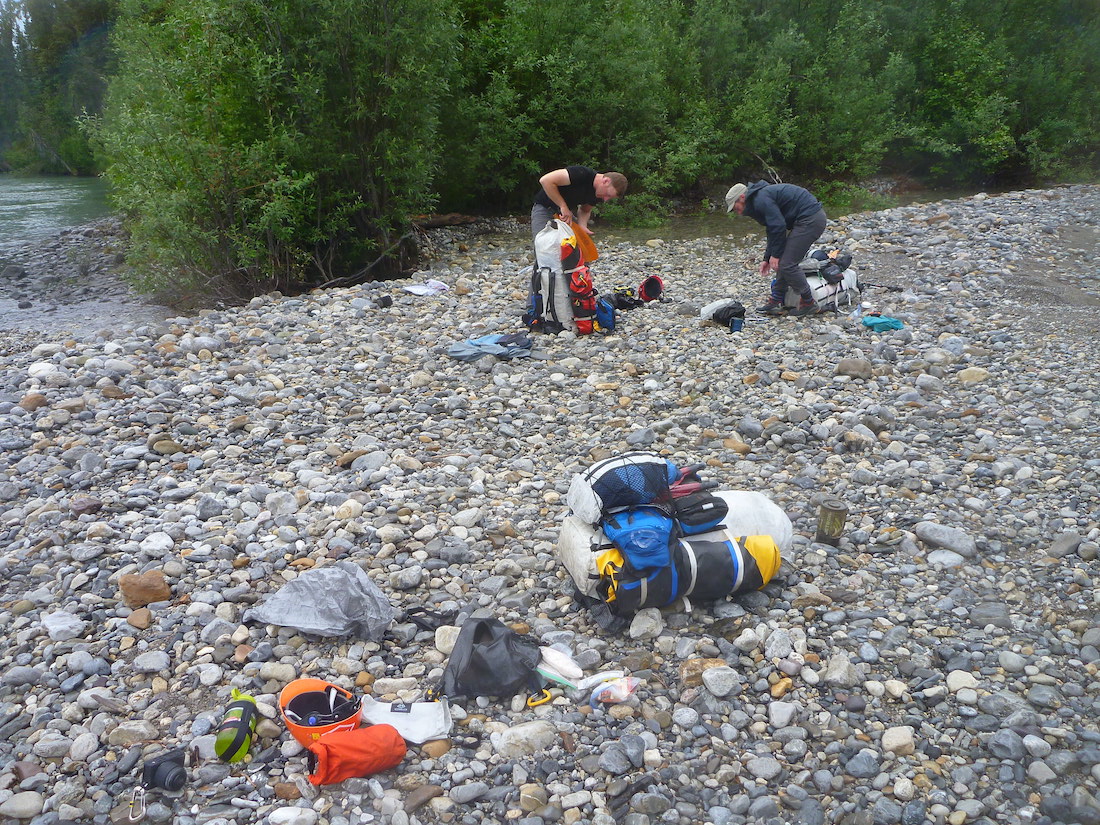 Stoke was low as the weight sagged into place.  We reckoned on 70-80lbs in the HMG 4400's.
Considering they recommend a max weight of 60, they carried surprisingly well.  Sky had even more weight in his (85?), and while we constantly expected a shoulder strap to blow out, they never did so much as blink.  I don't recommend carrying this much in them.  Its not much fun.  Bt, its nice to know that even though the flesh is weak, the HMG is up to it. 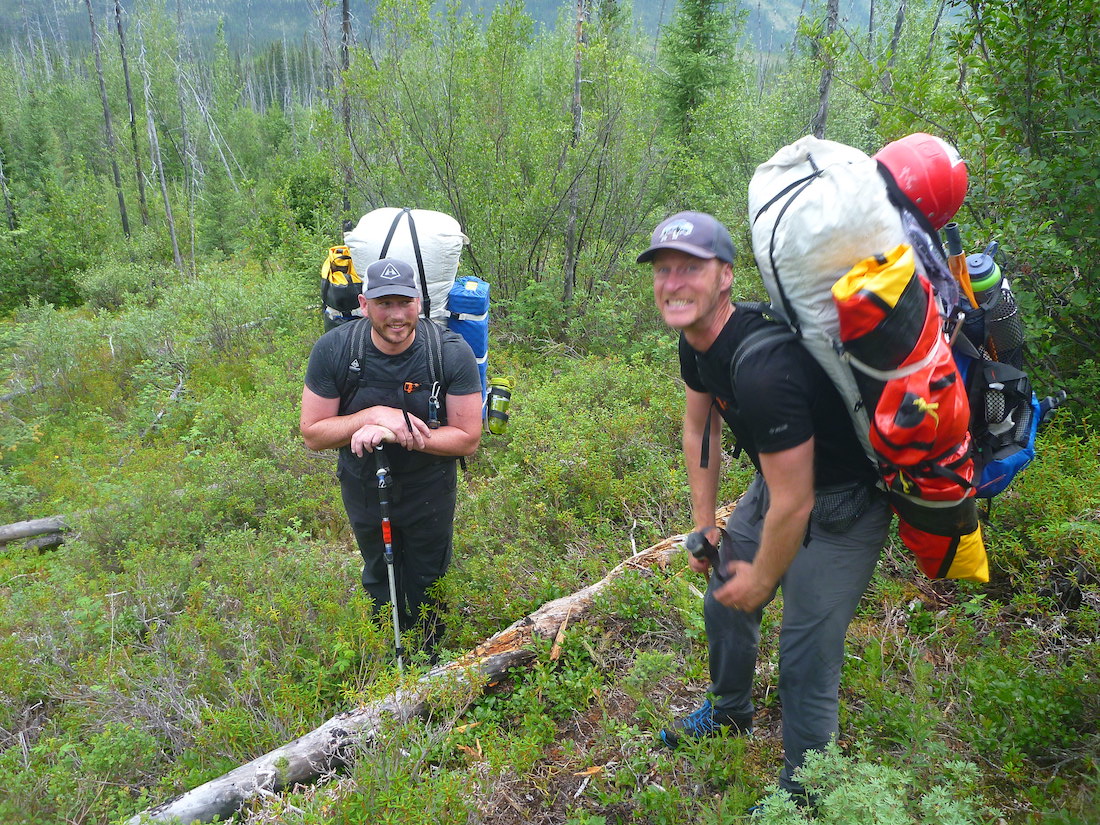 We carried up the creek, linking gravel flats, until being forced out of the valley and up into a relatively clear old burn.  We followed this up to the alpine in off and on again rain before calling it a (long) day around 8PM. 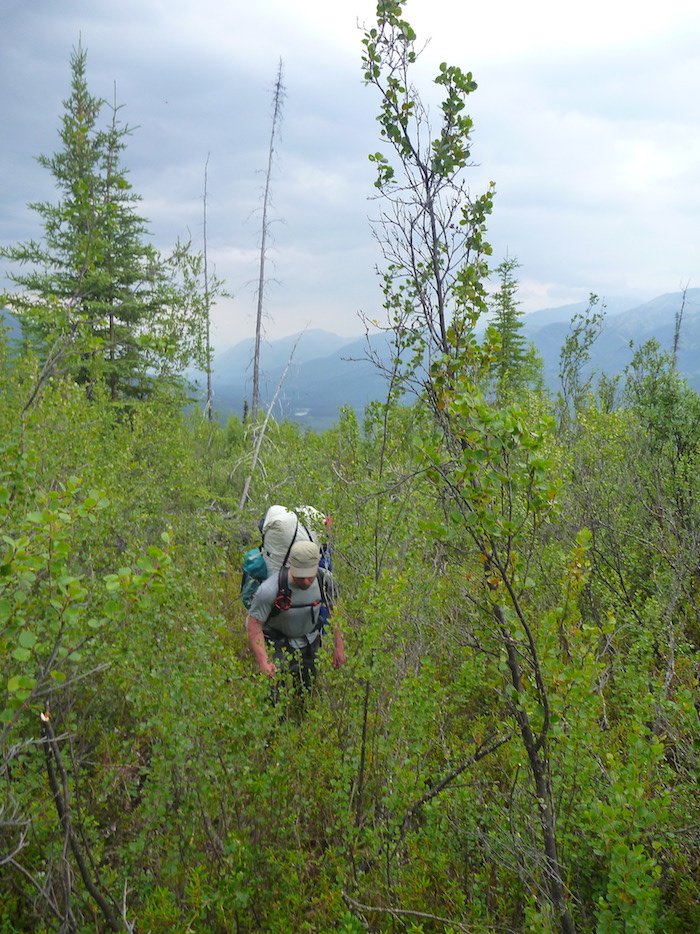 It wasn't a great site, as there was no water, but it was flat-ish and located spectacularily.
It poured rain all night, and in an MVP worthy move, Paul B scuttled about in the maelstrom, filling water bottles and pots from rainwater off the HMG tarps. 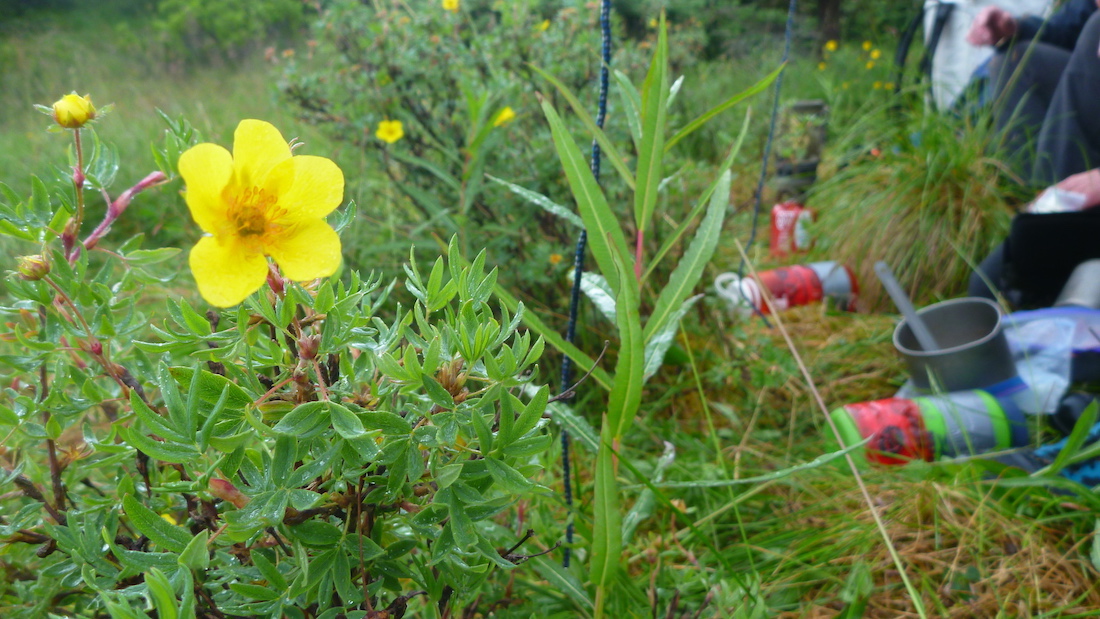 Camp was socked in when we got up, but the clouds began breaking up, and we followed game trails along ridges in clearing whether. 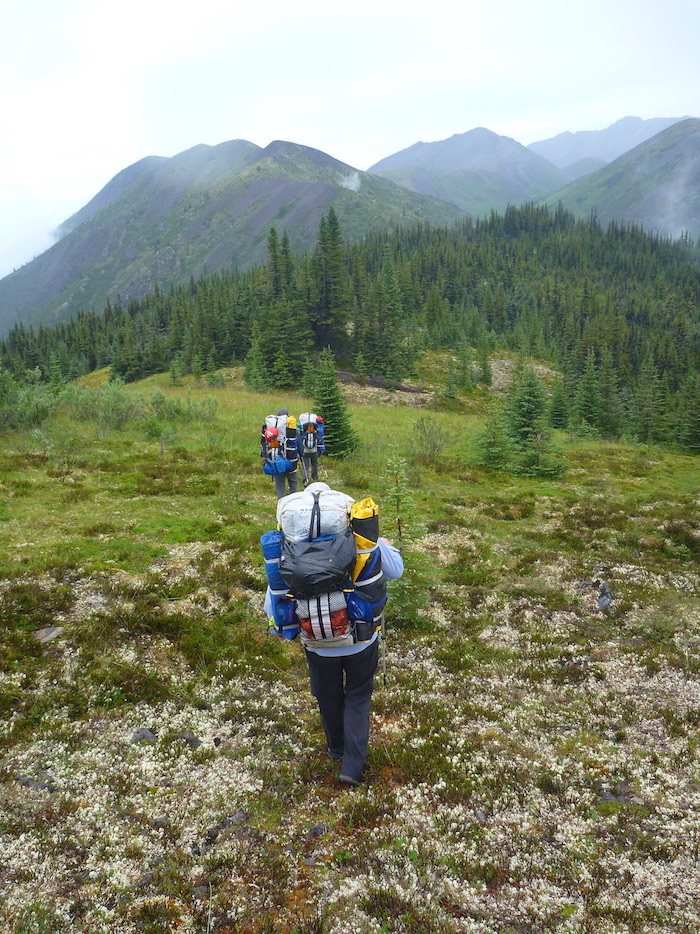 We ended up having to bust into a valley and back out again to access the route to our pass.  Well placed Moose and Caribou trails allowed us to move quickly well above the tangled Alpine Fir forest. 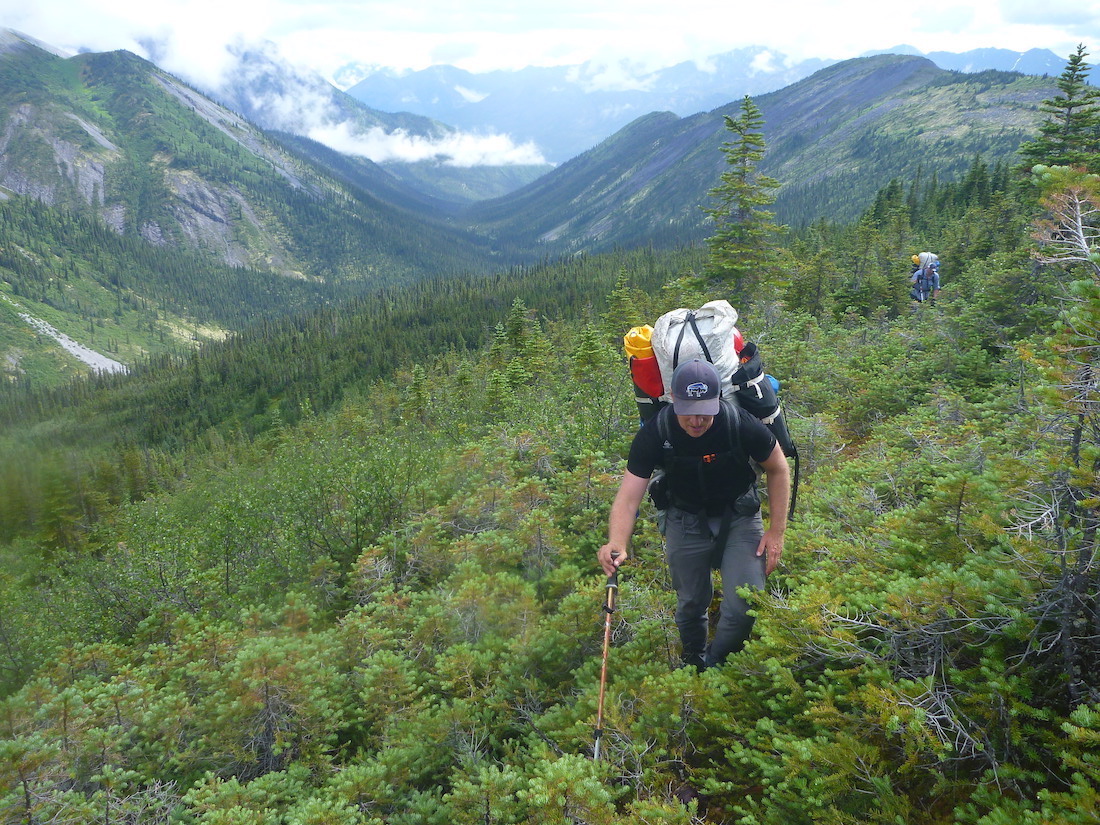 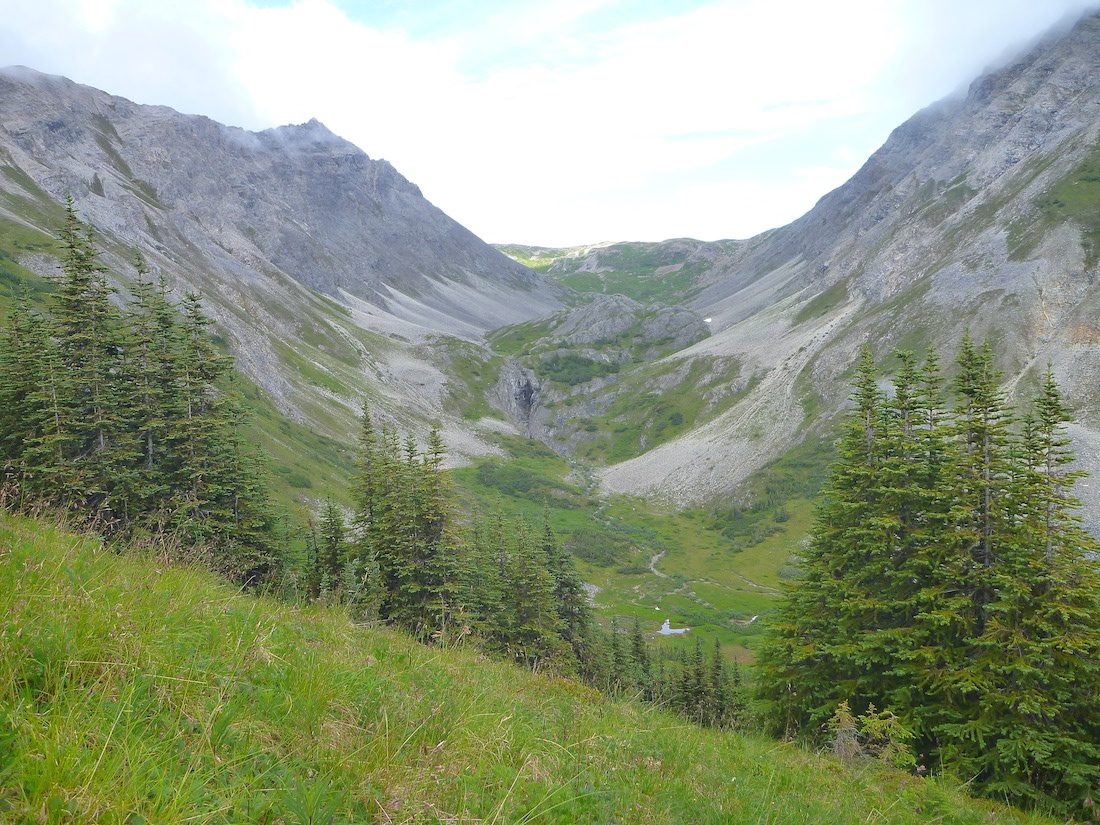 We got into some amazing alpine meadows, and when an afternoon thunderstorm blew up, we gratefully threw up a tarp and had a brew up. 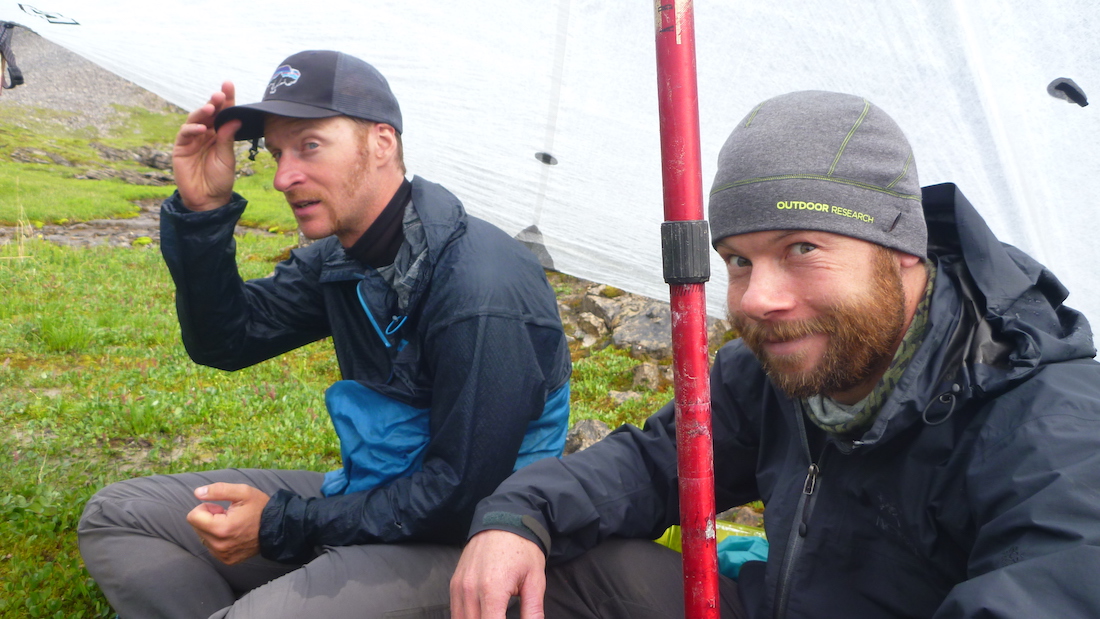 We walked over the pass late into the evening, in wonderful sunny weather, and made a 5 star camp in an alpine meadow well above the un-named lake referenced in the Nááts'ihch'oh trip planner. 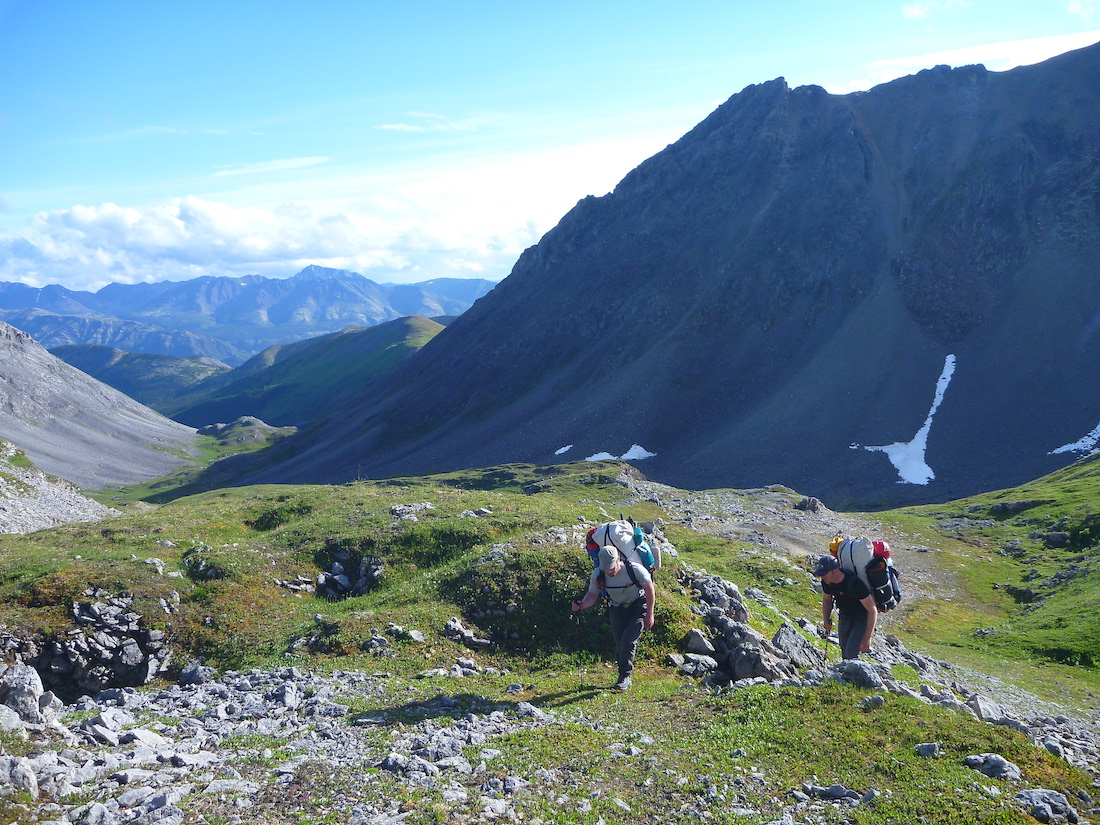 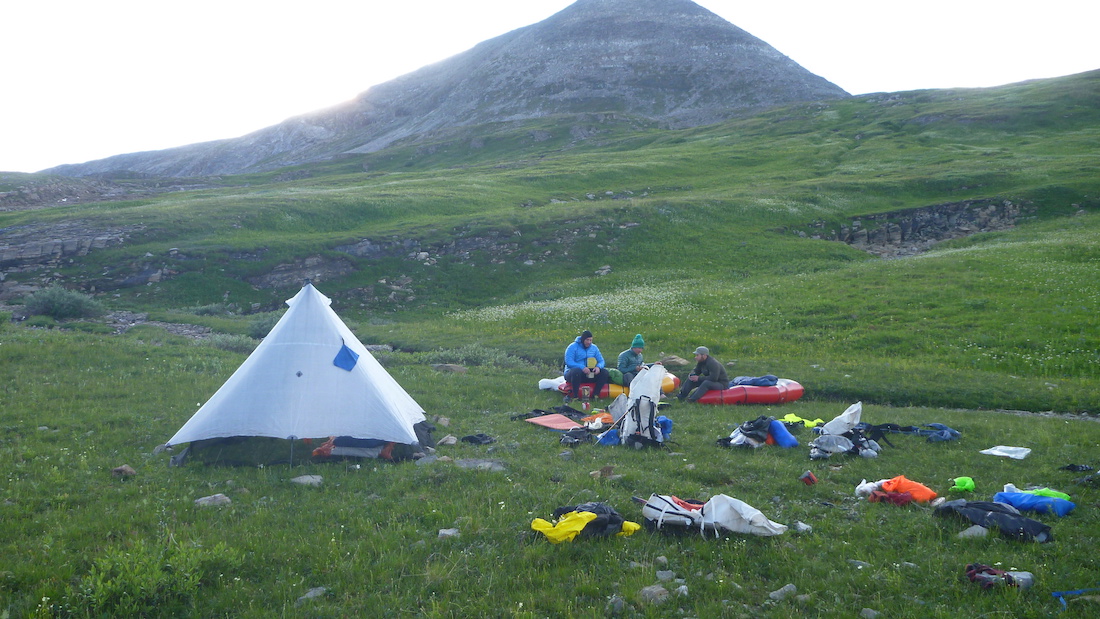 They are correct.  The area around the lake is a hiking nirvana.  It would be wonderful to spend a week here and explore.  Valleys extend off into the horizon allowing easy access to spectacular mountain ridges. 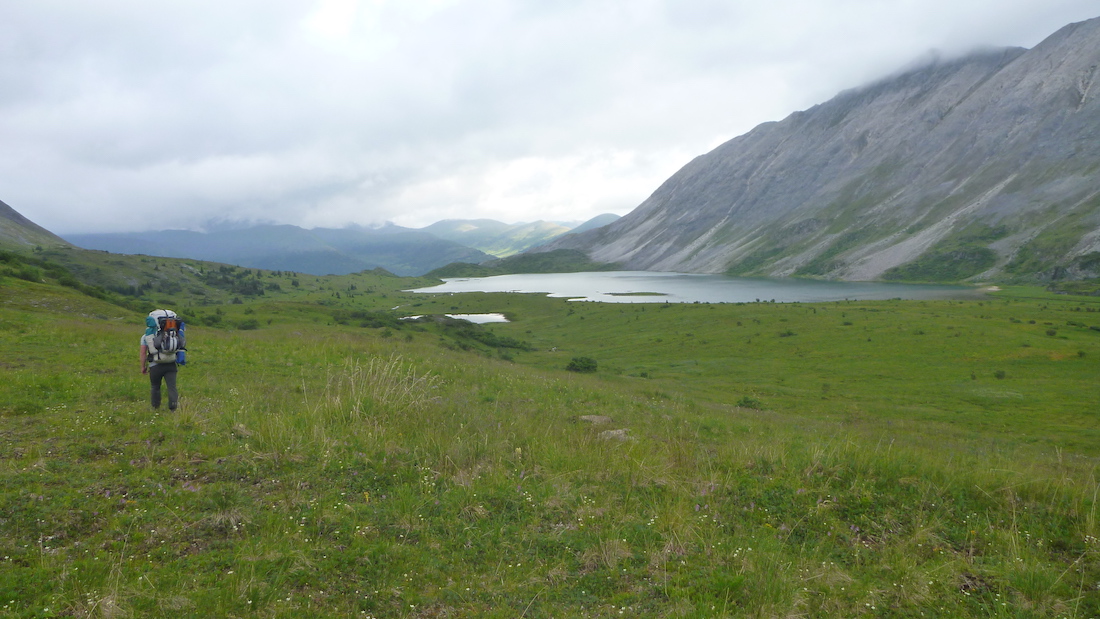 We however had a date with the un-named creek draining out of this lake and followed sporadic game trails before finally busting down through the forest into the buck brush and willow choked valley bottom. 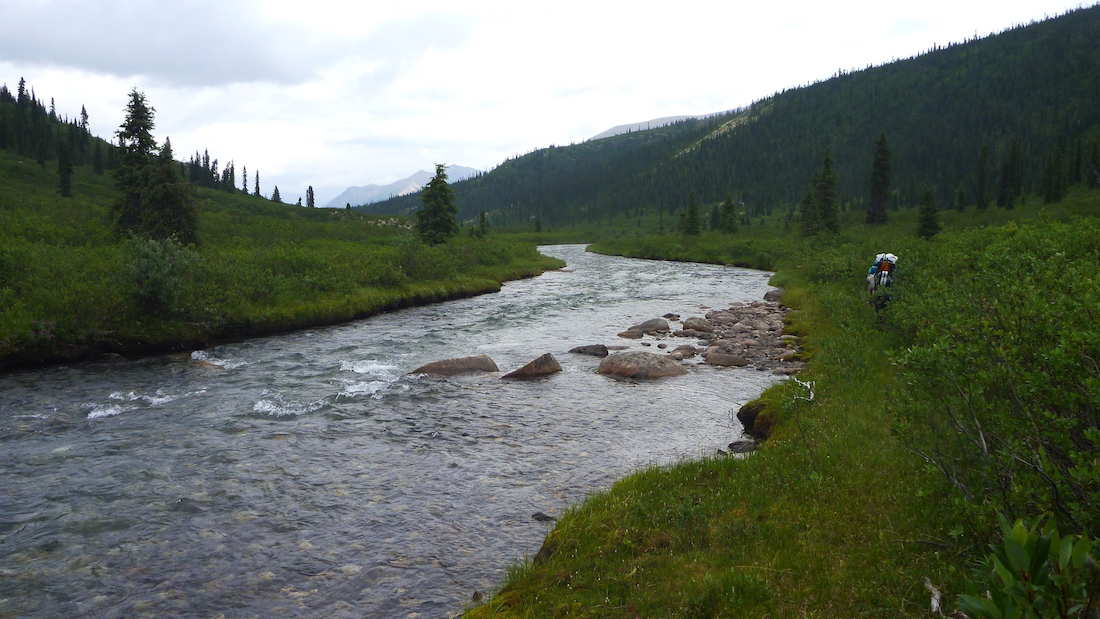 We followed game trails downstream until finally picking up enough water to consider blowing up and floating.
We paddled for about 10 minutes before encountering the first canyon.  It had a narrow waterfall that necessitated a horrible portage around it.  It was hot, the bush was thick, and the scree covered canyon walls made the climb out and descent back in quite unpleasant. 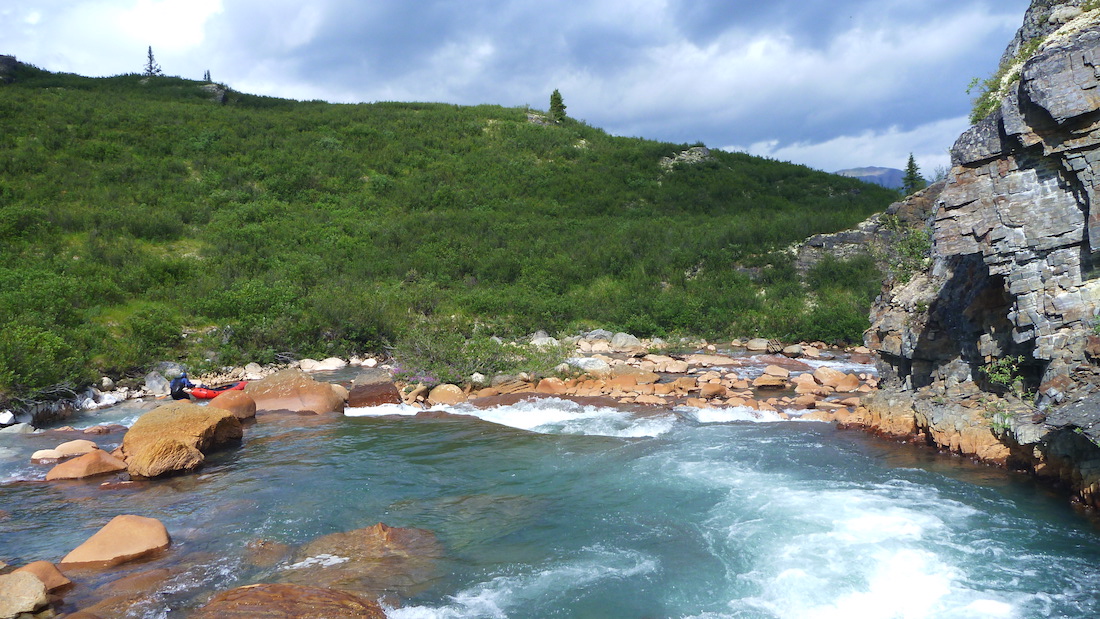 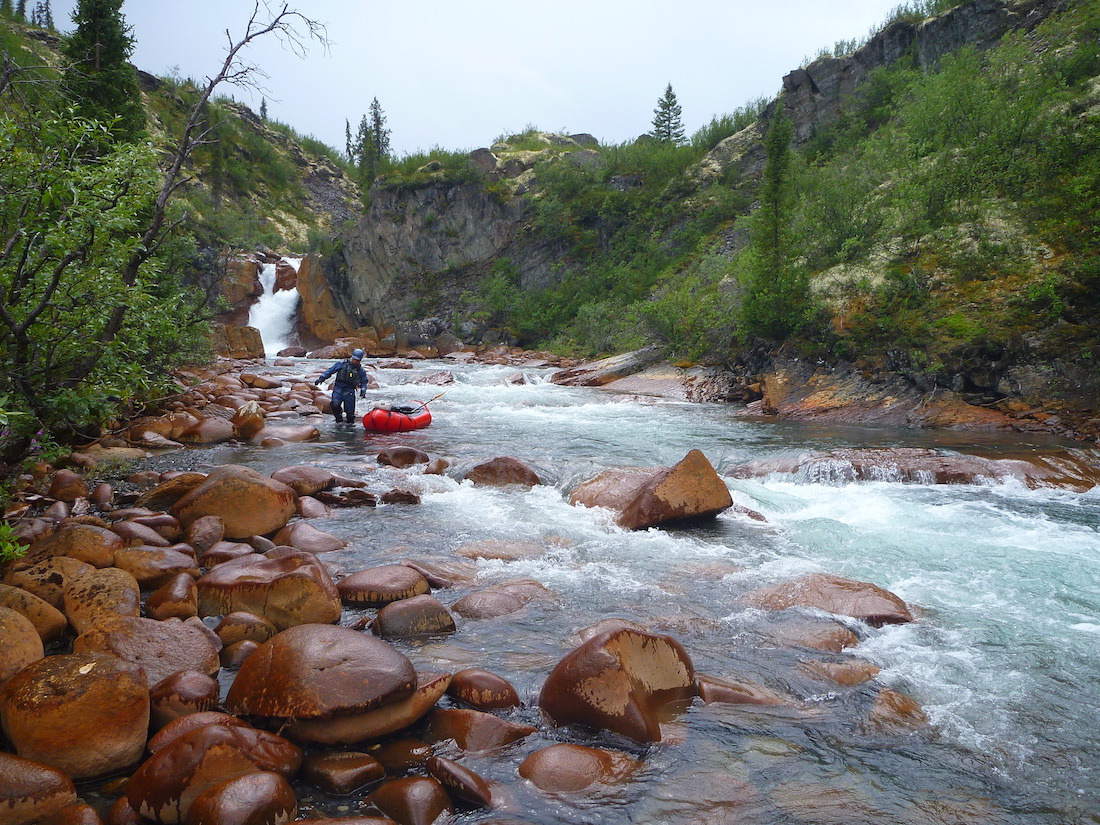 Relieved to be floating again, our stoke was rapidly shut down when we encountered the next impassable canyon.  As if to drive another nail in our stoke coffin, the weather gods decided to pour rain.  We deflated and packed up in a driving thunderstorm, and went searching for a game trail in the dripping vegetation that would take us around the canyon.
We found the trail, but became soaked in the process by the thick, overhanging foliage.
It was a cranky quartet that stopped at a creek mouth and blew up again amidst clouds of mosquitoes.
The gods can be kind sometimes, and this was such an occasion.
Five minutes downstream we came upon a perfect shingle bar, complete with firewood and no mosquitoes.
With shelter up and fire on, crankiness was soon replaced by contentment and hot drinks.
I would be lying however to say there wasn't an undercurrent of stress.
We had no idea how the rest of the creek (small river) would go.  The previous nights portages had us a bit gun-shy, and it was with a certain degree of uneasiness that we set off the next morning, although sun busting through last nights rain clouds had us smiling.
The river dropped away in front of us, with several obvious constrictions ahead conveying thoughts of un-runnable canyons. 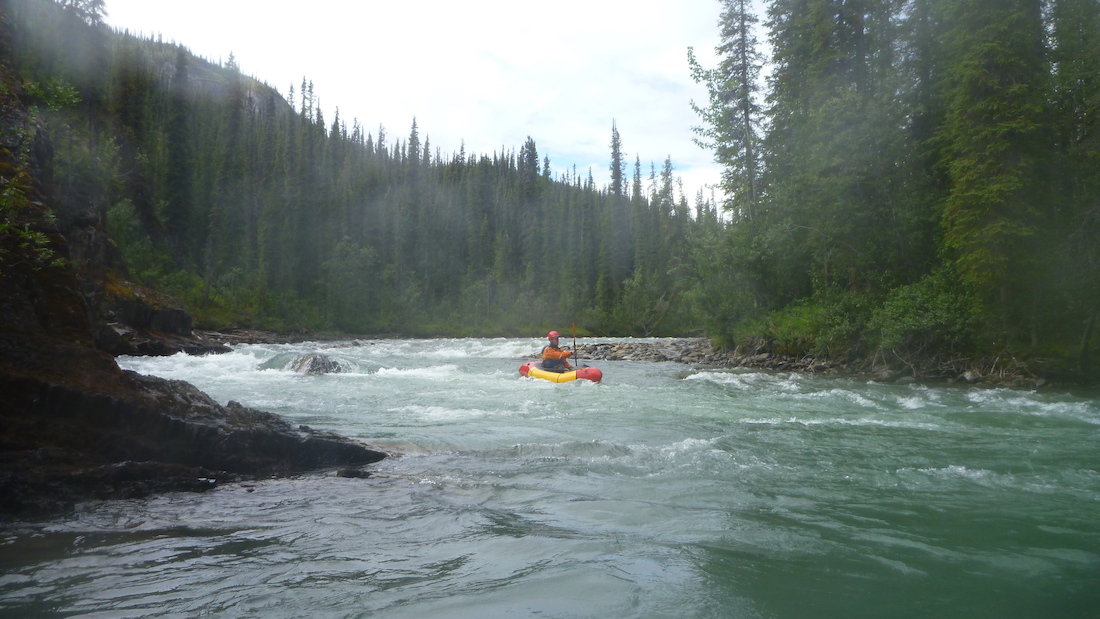 This was not the case however, with lovely little Limestone canyons popping up here and there with fun, splashy class II goodness.  The odd easy III chute popped up, and one small log jam.
Good times and we christened the waterway Gnarwhal creek in honour of Paul B and Dylan new boats.
We made good time down to the Broken Skull, and in short order arrived at the mouth of Grizzly  creek and access to the Black Wolf. 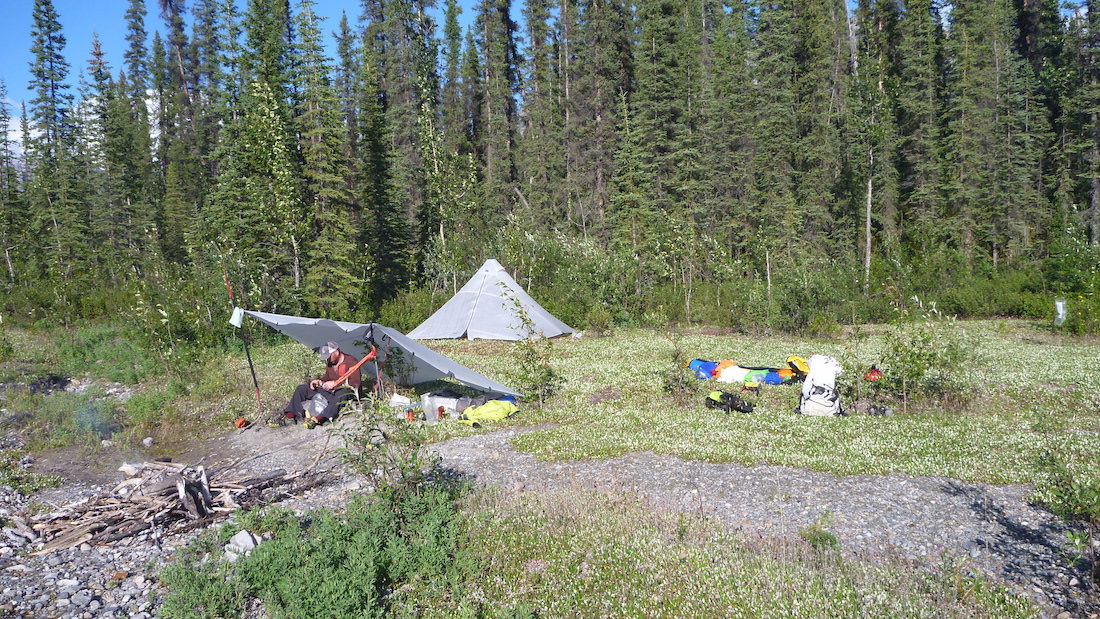 Posted by Paul Christensen at 4:08 PM