After a lovely alpine mountain bike ride on Saturday, I felt Sunday would be a nice day for a nice hike in the alpine with Michelle, Kona and our friend Chris.  And it was!
We decided to go and bash our way up Mount Gilliam, which just so happens to be located behind, as in right behind our cabin.
The funny thing is, it seems that for many people in Whitehorse, unless it is in the Whitehorse Hikes and Bikes book, it simply just does not exist as a hiking destination.  Whatever the reason, its great for the rest of us as we never have to worry about crowds (hah!).
Lovely weather Sunday morning beckoned to us, luring us into the alpine. 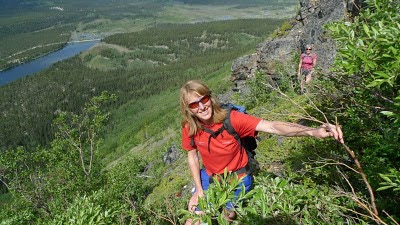 The usual assortment of Willows and Dwarf Juniper barring the way. 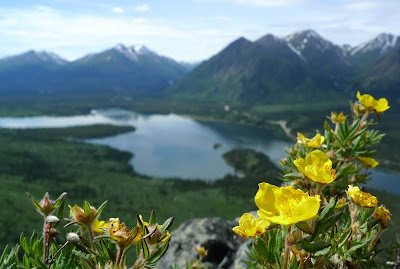 Some sort of alpine plant. 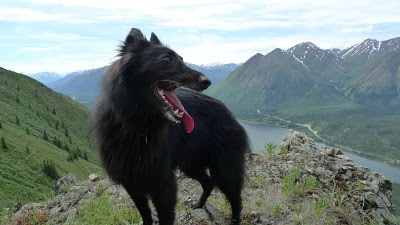 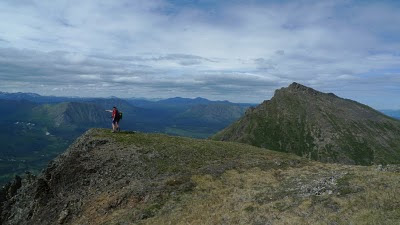 The usual gaggle of Alpine Nymphs. 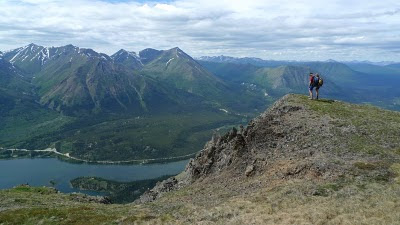 More oggling of views, of which there were plenty. 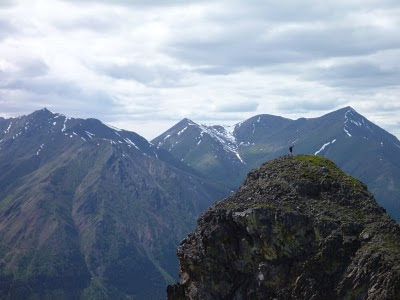 I scampered out to this pinnacle and found generations of Sheep poop.  And a view as well. 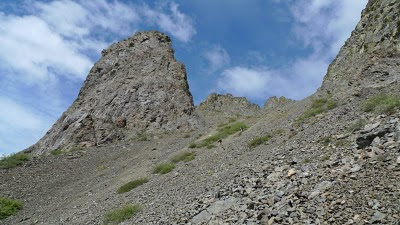 We found grade A, number 1 scree sliding on the descent.  Unfortunately, it funneled us into some grade A number 1 Poplar bashing to gain the valley bottom.
All in all a lovely day out in the alpine.
Posted by Paul Christensen at 8:24 PM

Ok, until I upgrade my Vimeo account to allow HD embedding, you can listen to the vid hear, or click the link below to see it at Vimeo.

This is a trip I have wanted to do for a while: up Birnie creek, over the pass into the upper Watson river, then paddle down the Watson until you can take out near the Red Ridge trail. 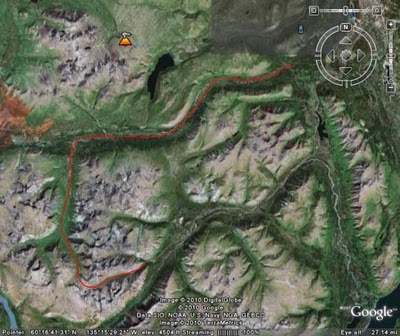 So, recruiting Malcolm as someone who doesn't mind a thrash, off we went.
Ideally, we should have waited until the weather warmed up, but this was the weekend so we took a chance.  Highs were only supposed to be 10-12C in Whitehorse, and as this river, as well as the nearby Wheaton river are snowmelt dependent, the temps were not ideal.  It actually snowed on us both days, and there was ice on the standing water Sunday morning. 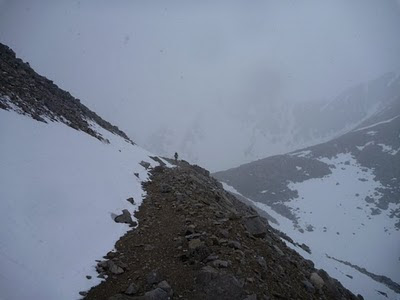 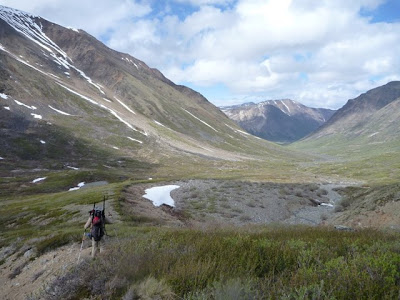 Looking down the Watson headwaters
After getting over the pass and out of the snow, we dropped off the old cat trail, and headed down the Watson river, which at this point is a small creek.  I knew there was an old trail up this valley which supported an old mine back in the early 1900's.  Mathew Watson of Carcross had this small prospect 100 years ago, and we found his old cabin down the valley a ways. 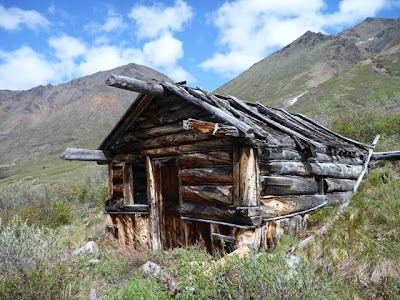 Mathew Watsons cabin
We found lots of old writings on the wall, and even found old box lids with his name on them making up the doorway.  All this stuff was hauled up by horse. 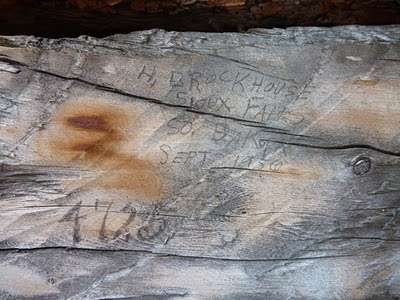 We initially picked up the old trail, but lost it later on, which left us busting through the Dwarf Juniper.  Eventually we hit the meadows where the Watsons first major tributary flows in from the West. 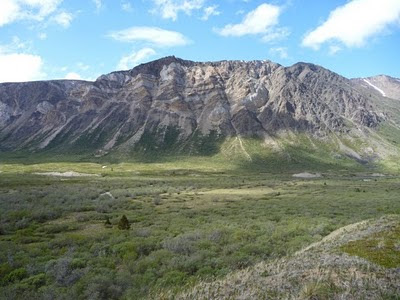 This effectively doubled the volume which was enough to encourage us to kit up for rafting. 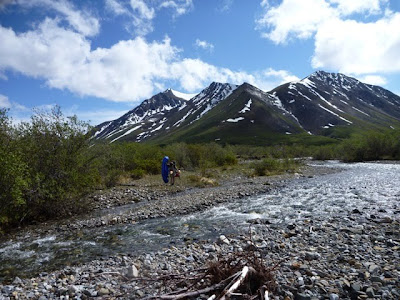 We spent the next few hours alternately rafting, grinding and carrying as the river braided out and came together.  After a few Kms of this sort of progress, the river took off into new channels choked with Willow, motivating us to pull out and switch back to bushwacking mode.
It was now past 7PM, and things were not going as well as we had hoped.  We had a quick discussion, and decided to make our way back, as the river below was unknown to us, and the low flow had us moving too slow. 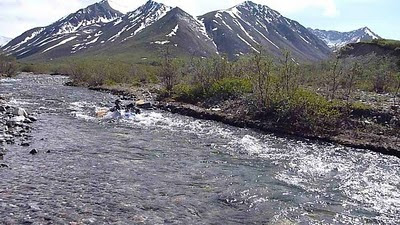 We picked up the old horse trail and started heading back up the valley.  The trail was mostly pretty good, but there were some Willowy sections.... 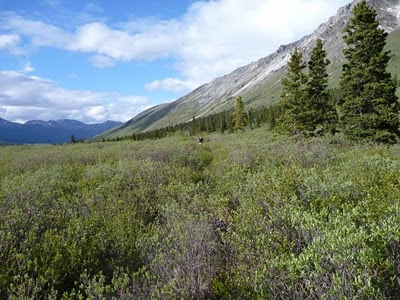 We camped around 9PM near our put in under what I call Swirl mountain. 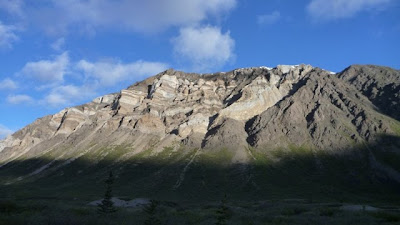 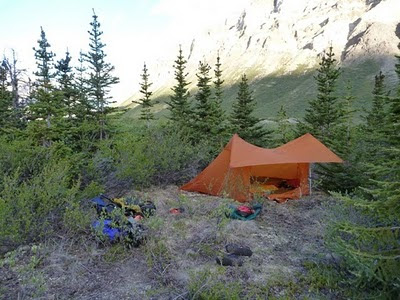 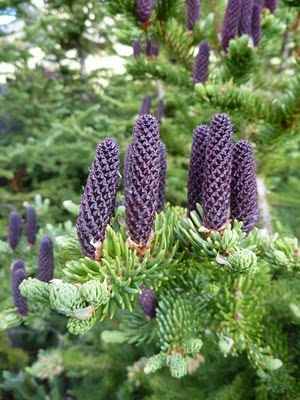 Cool Alpine Fir cones.
We were able to stay on the horse trail all the way back, which will definately make things faster next time.
All in all a good trip, but it needs more water.  So once things warm up, we'll be heading back, and with one more day of food.
Posted by Paul Christensen at 12:19 PM