Are Bud and Lou for you

I need a new bike like I need a hole in my head.  Ross would disagree, but Ross has a Rolex, so his opinion doesn't hold much weight.  However, when I saw that this years Surly Moonlander came in a 24" XXL frame, then and there I had to have it.  Not that I can't ride my old style 22" Pugsley, but the top tube is short for me.  Thats my excuse and I'm sticking to it.
Jonah at Icycle came though as per usual and scored me the frame.  I was in New Zealnd at the time (November) so I went with the status quo of REALLY fat tires, Big Fat Larrys.  Those shod on Clownshoe rims are the defacto gold standard of fat.
I had not met Bud and Lou.
I was in NZ.  I was out of the loop.
I went to pick up the Moonlander when we got back, and there they were.  In all their sumo-esque glory.
Gotta have.
The report.
They are fat.  As in really fat.

Ok, they are huge.  And super aggressive.  But do you really need that?
Well, certainly most of the time one does not.  However, at 6'7" and 240 with all my winter gear on, I figure this set up puts me on par with average size riders running something more conventional.  The nice thing about running this kind of set up, for me anyhow, is that I don't have to run low pressure to get surface area, and thats a huge advantage.  For anyone really.  Low pressure is the speed killer.  Its what really creates drag.  I was expecting lots of it (drag that is) but at 20 PSI, I didn't experience any more perceived drag than I did off of my Big Fat Larrys with 20 PSI in them (mounted on 80mm rims).  What I did experience was unparalleled traction.  Traction reminiscent of riding dirt in the summer with a set of 2.4s.  I had been pretty happy with BFLs, and how they performed on climbs, but you can really hammer up the hills with these babies.  The big test was coming out from Cantlie lake.  Two sleds passed me, and I rode the chewed up trail behind them.  The float was superb, but the climbing was sublime.  I was able to ride up the long climb to the Grey Mountain road in the freshly churned up snow, and I know that even the BFLs would have given up the ghost in those conditions.  That was the sell.
I was prepared to only bring these out for the big trips where conditions would be unknown, but given their relatively low drag, I'm using them more than I thought I would.  They are just too much fun.  I spent the last few days trying to wash them out on corners.  You can do  it, but you have to work on it.  No comparison between them and BFLs (never mind Endos).
If I was going to ride the Old Dawson Trail right after the Quest went through, I would probably ride an Endo on the back and a Larry up front, pumped right up.  Just because.  But at any other time, with less than primo hardpack, these are going to be the tires that get mounted up.

Posted by Paul Christensen at 9:44 PM

Spent the weekend out at my friends trapline on the Teslin river.  Three of us went in to break trails, set traps and fix things up.
One of the highlights of this time of year is the amazing light you get later in the afternoon.  These two shots are taken on one of the lakes in his area where one of his line cabins is located. 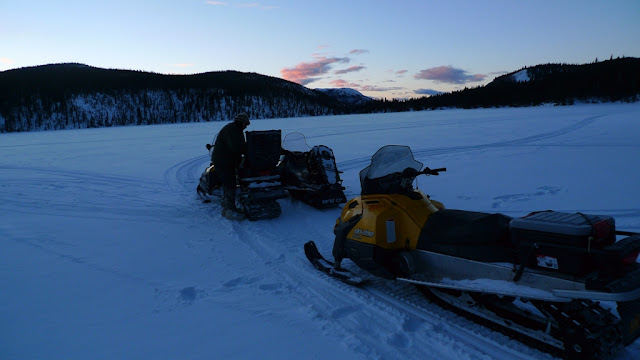 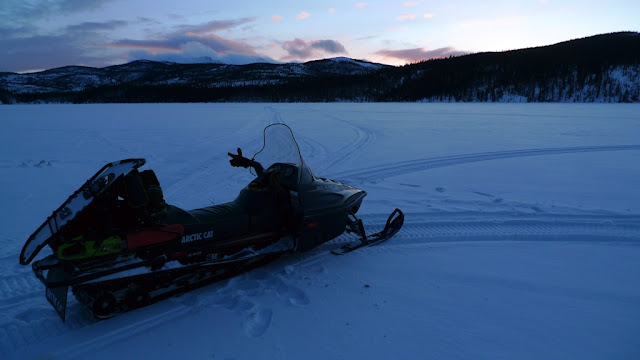 Posted by Paul Christensen at 7:32 PM

I'm starting to hate winter.
Not the lovely February and March winter, when the days are stretching out, the sun has some real warmth to it, and you get those great, soft evenings when the light works magic on the mountains.  When there is lots of snow, well packed snow, when you can get out and ski or bike to your hearst content.
Not that winter.
I hate November and December.  November.  Too much snow to bike, not enought to ski.  Super short days.  Lots of North wind full of moisture off the lakes.  Not really cold, but you're not used to it, so it feels really cold.  Dark when you go to work, dark when you come home.  Thats the winter I hate.
To combat this, Michelle and I over the last few years have been going into winter avaoidance mode, or WAM for short.
This is accomplished by heading to New Zealand for 2 months every two years.  Right during the part of winter I hate most.  November and December.  Works out well, as its early summer down there.
Here's some photos to ease winters passage.

Posted by Paul Christensen at 6:47 PM