Last Sunday dawned perfectly, and after wasting Saturday working on our boat, I felt driven to get into the alpine.
Michelle had run leg 8 in the Klondike Trail of `98 Road Relay the day before, but being the machine she is, was willing to make the most of a promising fall day.
We grabbed the hound, headed off, and were cruising up the trail to Mount Lorne by 9 AM. 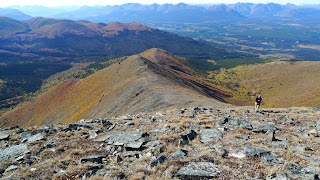 The day was perfect, and I do mean perfect.  Warm, very little wind, stunning colours; the best day of the fall I think. 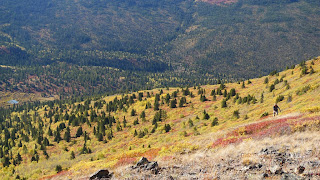 We were on the summit by 1 PM.

We arrived home after 8 hours out, and headed off to the Edgewater for a well deserved pint and a burger.
We are currently getting packed up for the fall Moose hunting trip.  More to come later.
Posted by Paul Christensen at 11:00 PM

Time To Catch Up

So August was pretty busy.  Yessir, lots going on.
First of all, my old compadre Grant and I loaded up his C-180 with gas and food and hit the mountains in search of the elusive Ovis Dalli.
Initially we flew to "Daves Lake", but after 3 days of heinous wind, and no legal rams, we re-loaded and headed further afield. 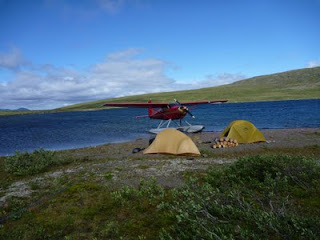 The wind made for a wild take off, but we managed ok, and soon found ourselves a new lake to land on.
We spent the next day putting in lots of vertical, and horizontal too, but only saw a few groups of young rams.  Lots of ewes and lambs though.
We theorized that the staking activity and associated helicopter use has impacted the ram population.
Remember; mining is good for us. 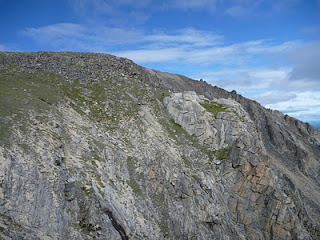 We spent some time scoping from camp, and found a group of rams, and were fortunate enough to be able to put it all together the next day, and harvest a nice 9 year old. 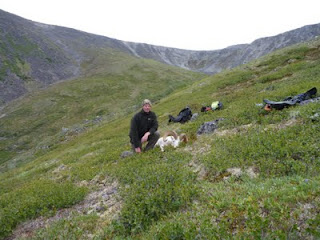 The rain moved in just about the time we finished up dressing him out, and it was two very soaked fellows who made the long walk back to camp on an overgrown horsetrail.

Late August found Michelle, Malcom and myself out in the alpine on a 5 day trip, which got aborted due to lack of time for the intended route. 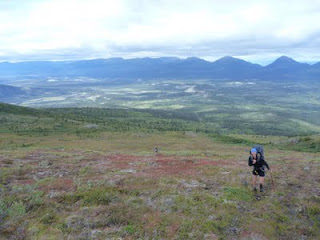 The wind was absolutely ferocious, and we had to make camp behind a small copse of trees. 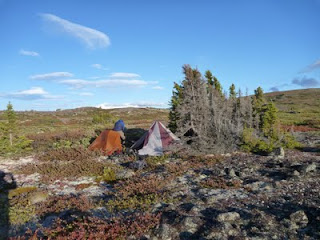 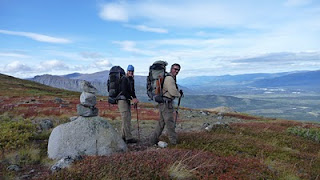 Posted by Paul Christensen at 10:50 PM