As winter starts rearings its ugly head, nows the time to recap a few fall outings.
Besides trying to squeeze in every last morsel of mountain bikeing, we managed to get in our fall moose hunt, which was successful.
The usual gang packed into the boat and headed off in search of meat.


Good thing its a big boat.
Grant had already bagged a moose earlier, so we were only out to get one.  I managed to connect the day before we were going to head home.  Got him early in the evening, and by the time we were finished, it was midnight and too dark to get back to camp.  Well, too dark after my floodlight packed it in and left us in the dark, floating down river.  So we spent the night around a fire, drinking single malt around a fire on a gravel bar, staying warm, and waiting until light. 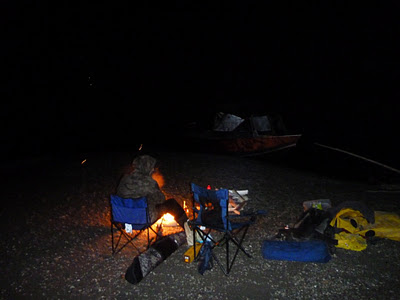 Michelle was back in base camp, tending the fire and keeping the wolves at bay. 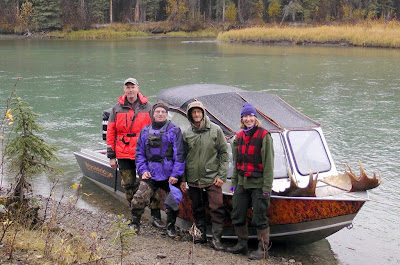 Went out on another, shorter hunt with two friends and one of the sons.
Went down the Teslin about 70 Km, but spied nothing.  Good time though, as it always is when out with friends.  Campfires, beers and messing about with boats.


Part of my job entails performing inspections on equipment, often times at some remote sites.
One inspection this fall was at Shingle Point, a DEW line station on the North coast of the Yukon.
I had to fly to Inuvik, then by a Bell 212 to the DEW line site.
The DEW lines have all been converted to unmanned operations, but rest assured they are well monitored.  They are ins such good repair, they could move 100 people in tomorrow.
Its was pretty spooky, and downright Dr. Strangelove-esque at the site.  Very 1950s.
I kept looking around for something to climb on in case a polar bear showed up.

All the fuel for the station is Jet B.  They burn it in the generators, and they can also fuel the helis or the planes with it. 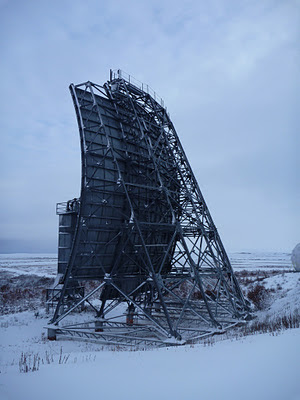 The radars face towards Russia, but its debateable whether thats the direction of threat these days.

Posted by Paul Christensen at 10:51 PM