The Rabbit trip was the "Big" trip, but there were lots of other shorter trips squeezed in.

I had the bright idea to try to PR Seagull creek off the South Canol.  Bad deal. No water.
However, there we were on the South Canol with 4 days in hand.  Didn't want to head home, so we blew up at the Rose River bridge #5 and cast off.  The Rose is full of fun rapids, and while not terribly "remote", its still a fun 3 day paddle down into the upper Nisutlin.  The lower portion from bridge #2 to #1 is almost never paddled, and we had no intel, so it was fun exploring.


Posted by Paul Christensen at 9:29 PM

Ever watch Monty Python's Holy Grail?  Remember the bunny rabbit scene?  Sure you do...

OK, the Rabbit river isn't a killer bunny, but it isn't your average cute little stuffed Easter bunny either.
This Rabbit has teeth.
And that's what attracted us to it.
Us being the usual suspects of Dylan, Paul B and new gang member Dave Gonda.  This tripped "patched him in" as it were. 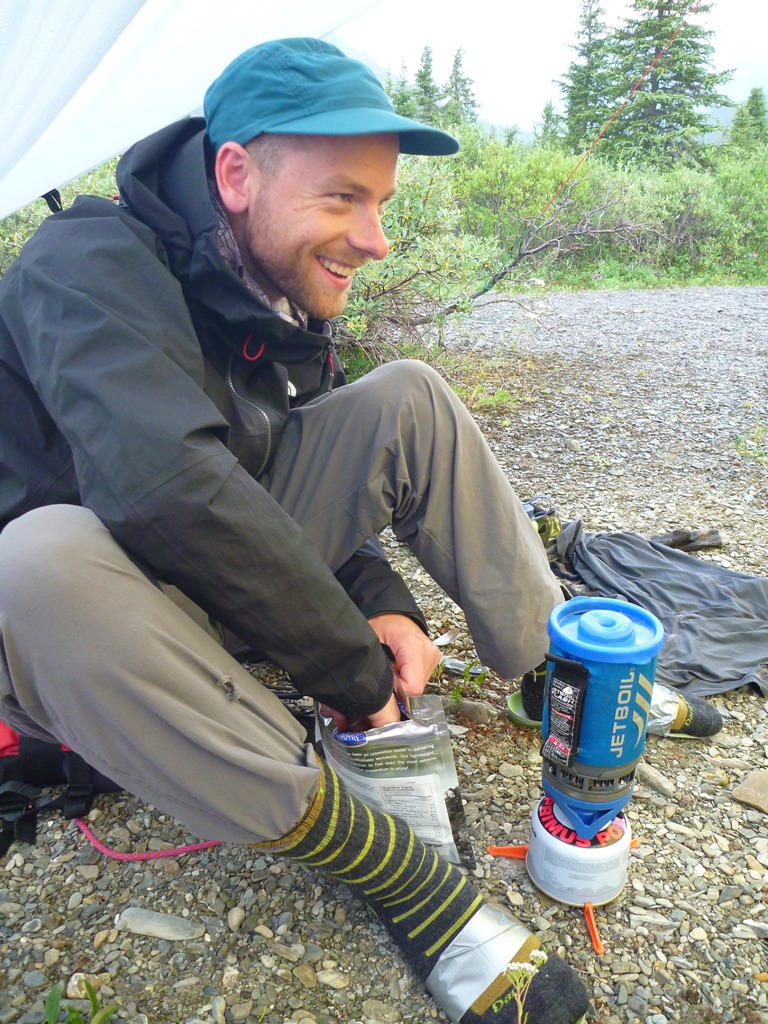 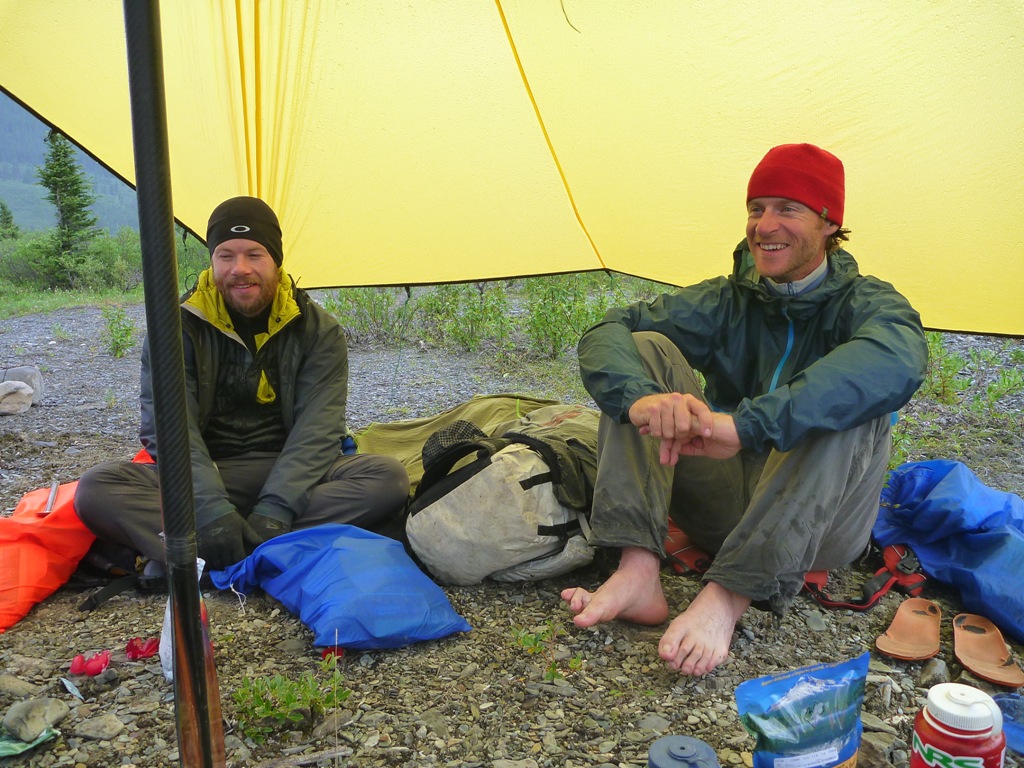 The Rabbit is a remote river in Northern BC with very limited access.  The "normal" access is by float plane into Netson lake, and then down Netson creek into the lower Rabbit.  We were attracted to the seemingly unknown upper Rabbit that looked to have heaps of rapids and a really nice walk in.

It had all those things, plus 2 canyons with LARGE waterfalls, fat camps and an amazing lower canyon, but more on those things later.

We packed up the MegaCab and booted out of town after work on Friday the 15th of July.  We rolled into Muncho lake late that night and dossed in a gravel pit for some much needed Z's.

The plan was to hike into the upper Rabbit river drainage via valley bottoms and horse trails, then start floating as soon as we had enough water.  We'd take out at the Coal River Lodge on the AlCan, then hitch a ride back to Muncho lake.  Great plan. 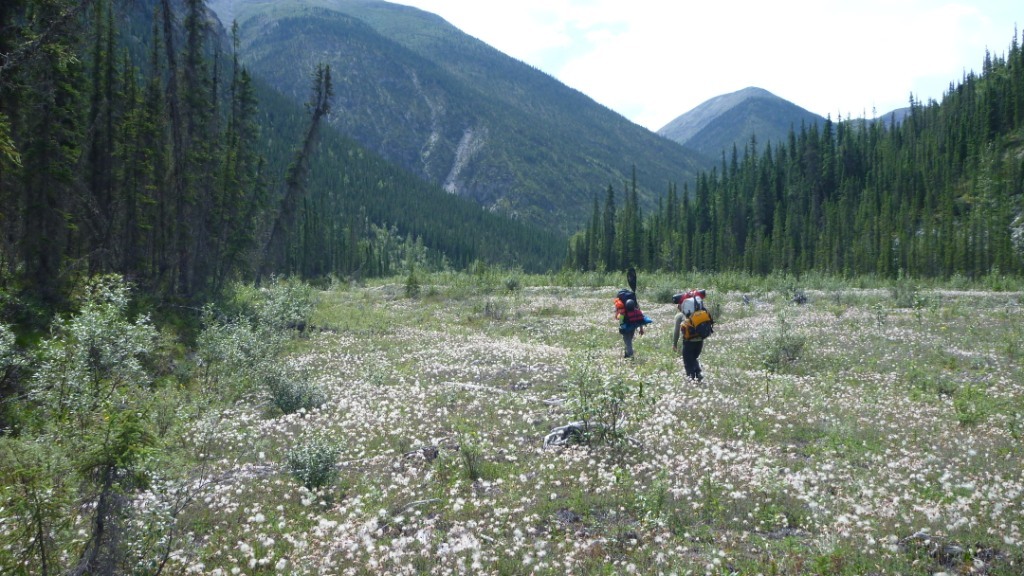 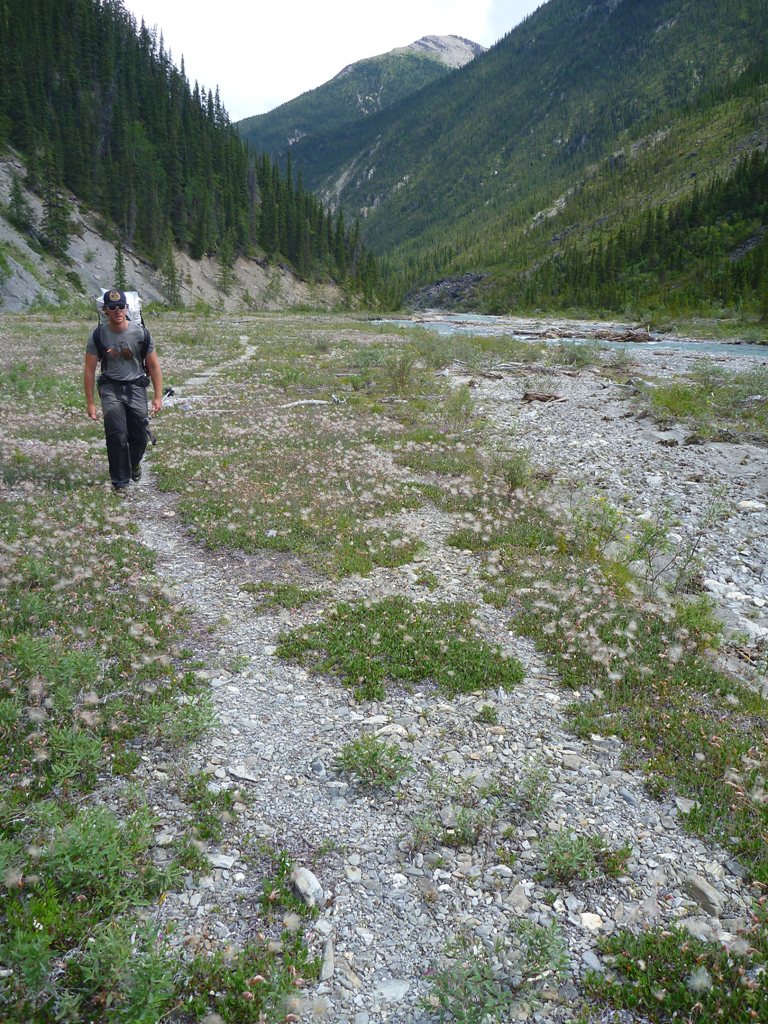 Numerous creek crossings kept us cool and soggy.
At a major drainage intersection, we took a short cut up a smaller drainage that would get us onto a major horse trail one of the outfitters in the area uses.  It proved quite interesting. 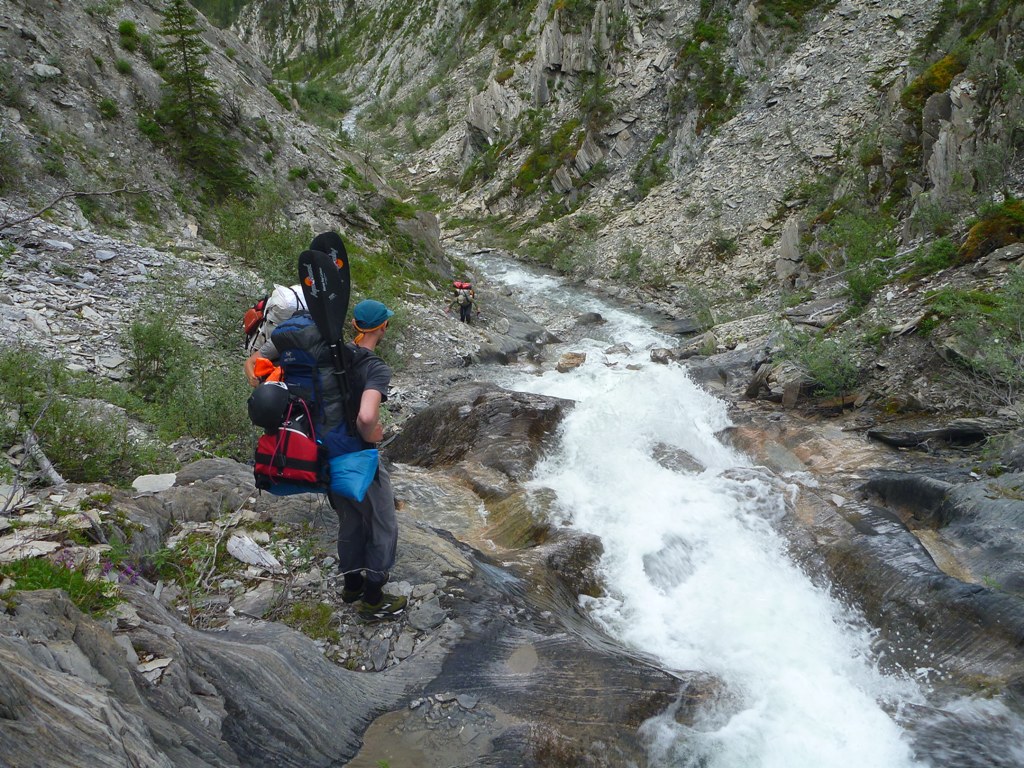 Some heavy afternoon thunder showers had us setting up the trap for some down time. 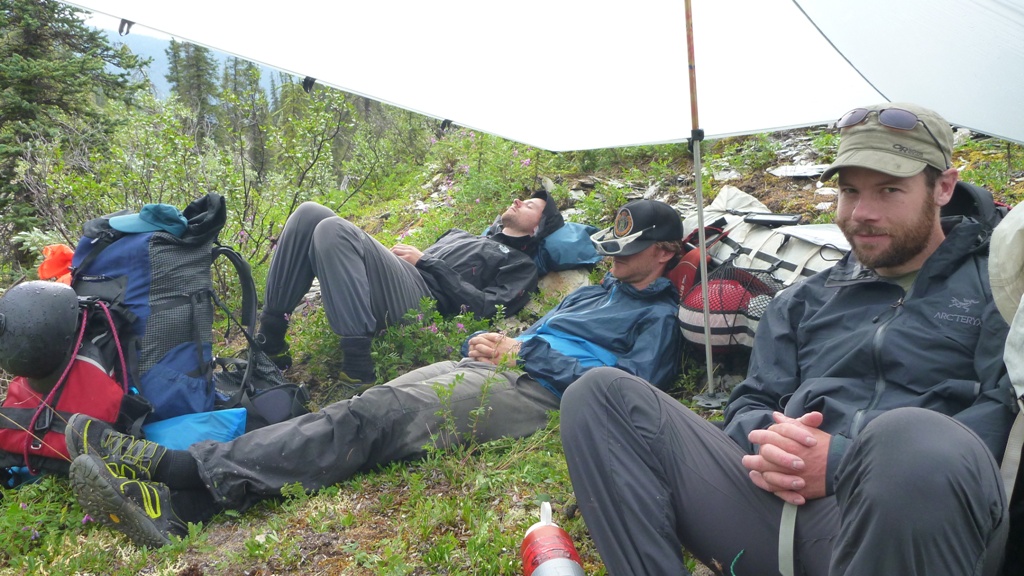 We rolled into a nice old horse camp tired, soggy and ready for dinner. 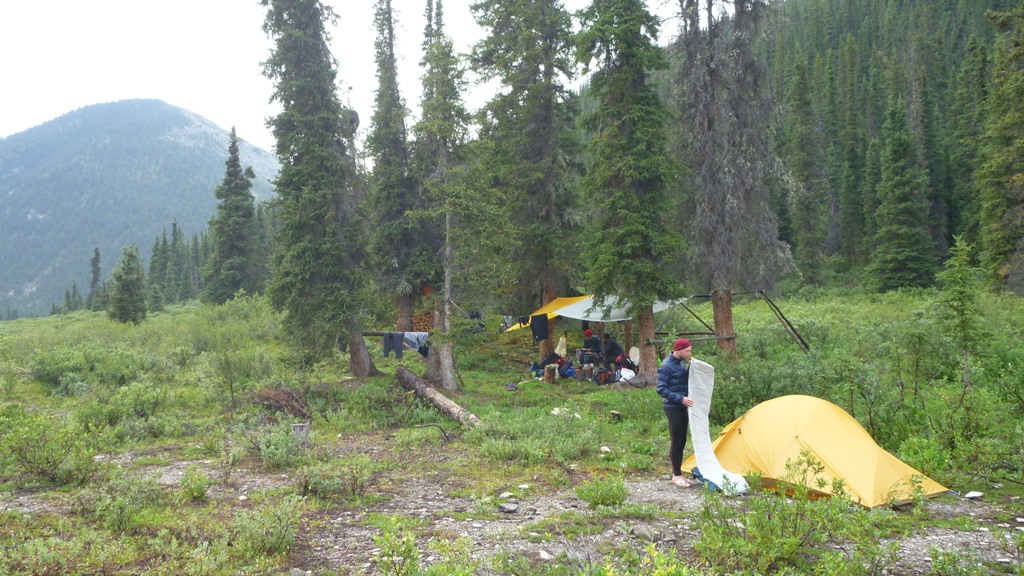 The next day was a repeat with a hot sunny morning.  We hit the horse trail and followed it up a creek and into the alpine. 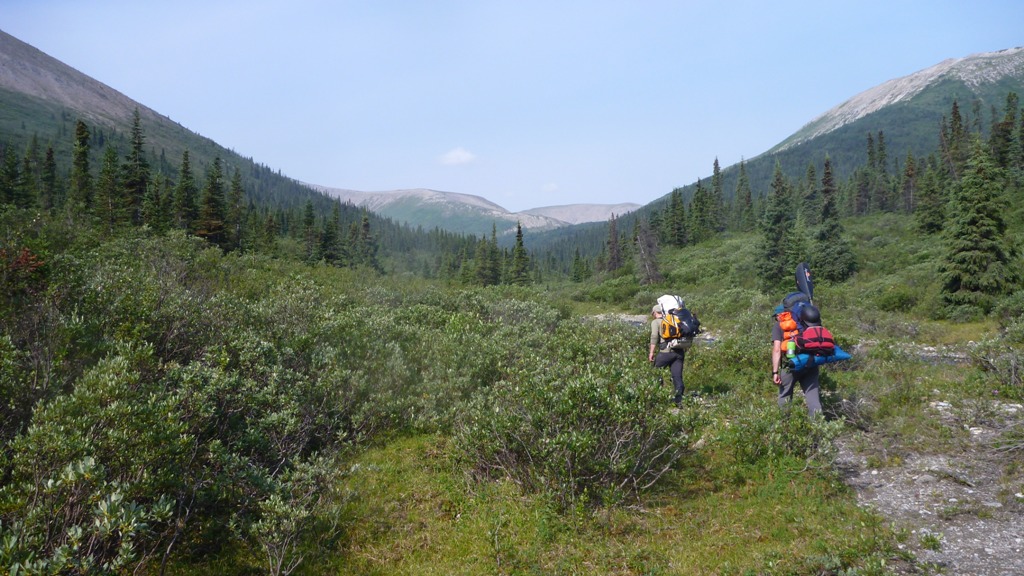 While taking a breather at the top of the pass, a small rabbit hopped past us without so much as batting an eye, indeed if anything it was a rather coquettish rabbit.  We took it as a good, welcoming omen rather than the Python-esque prognosticator of Doom. 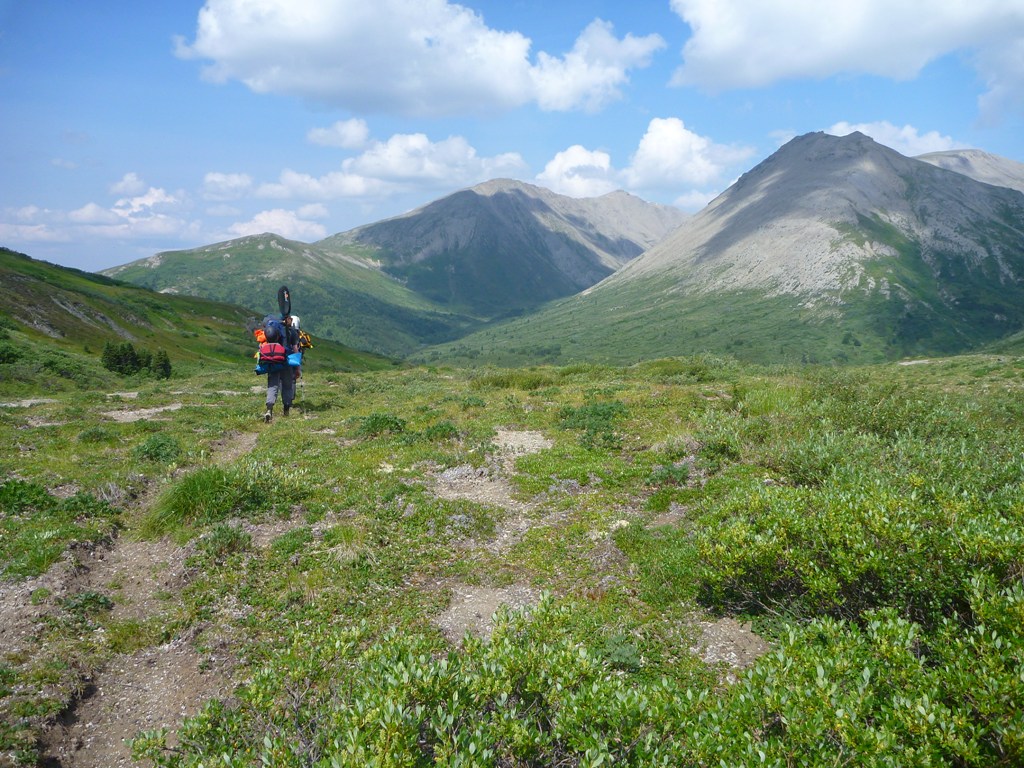 The hiking in over the two passes is mind blowingly beautiful.  Great horse trail and alpine vistas abound.
There is some brush however.  Without the horse trails, it would be pretty miserable going. 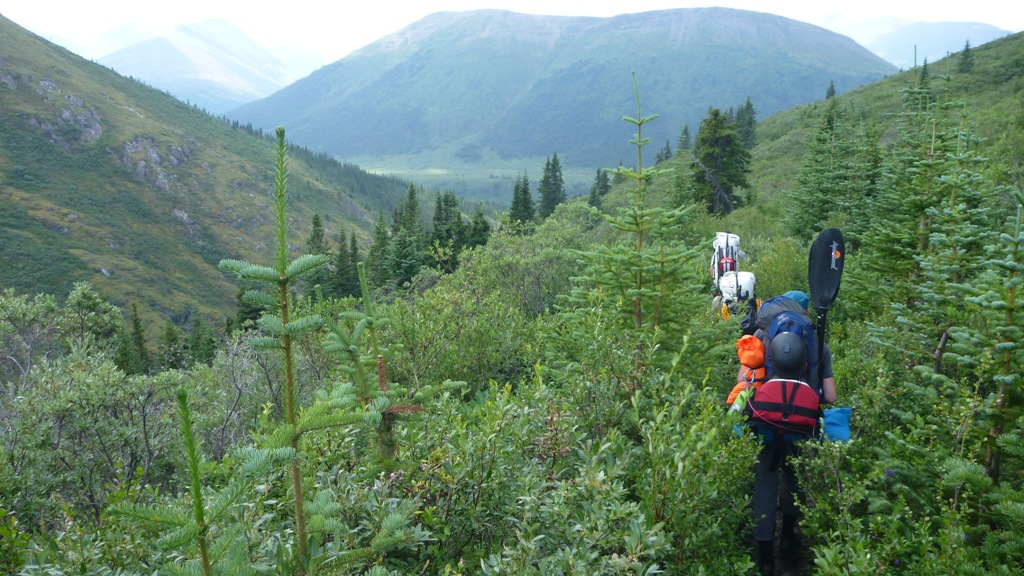 We dropped down to the nameless tributary which we have affectionately dubbed The Upper Rabbit. Pretty slim going at first, so we put in a few Kms and made a camp at the first major tributary coming in on river left.  Here there was now enough water to consider blowing up.  The walking is easy going on nice horse trail, and easy on the eyes as well. 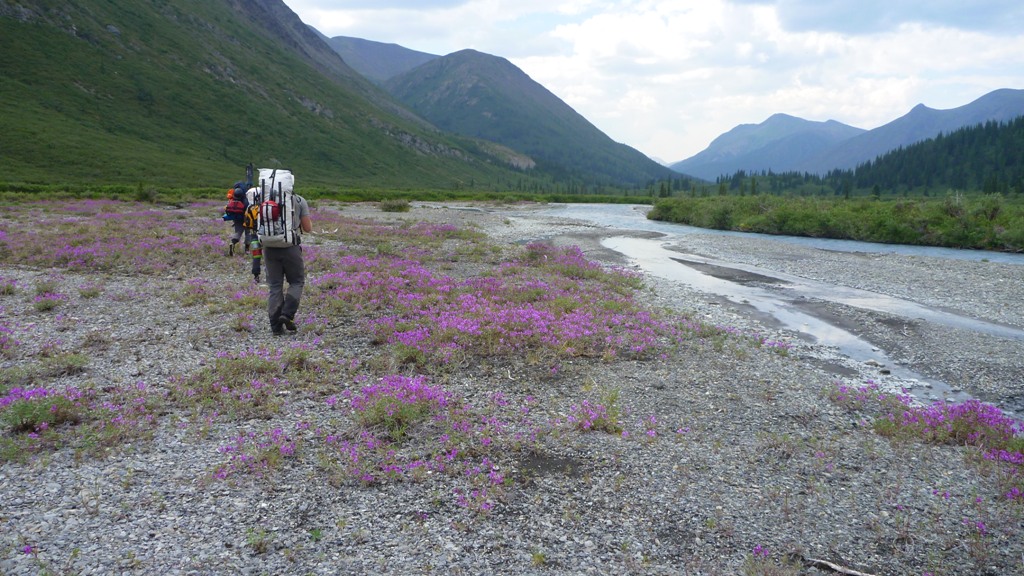 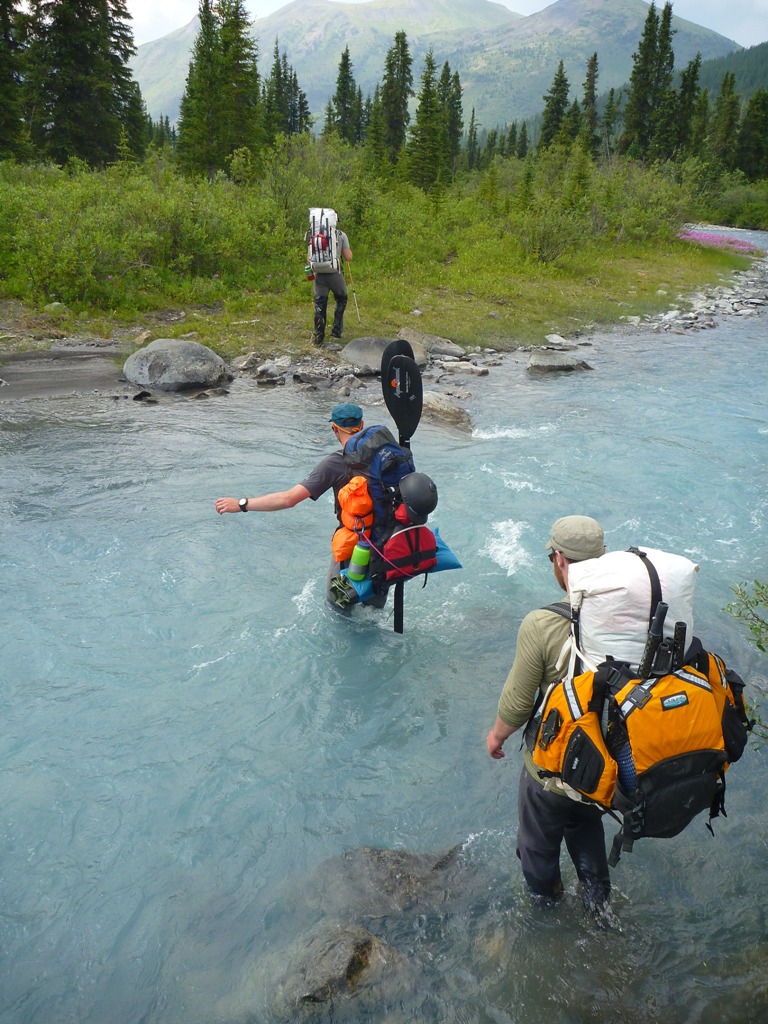 The next morning we aired up and embarked on our journey.  The river was just full enough for drag free paddling, and in short order, small rock gardens started spicing things up. 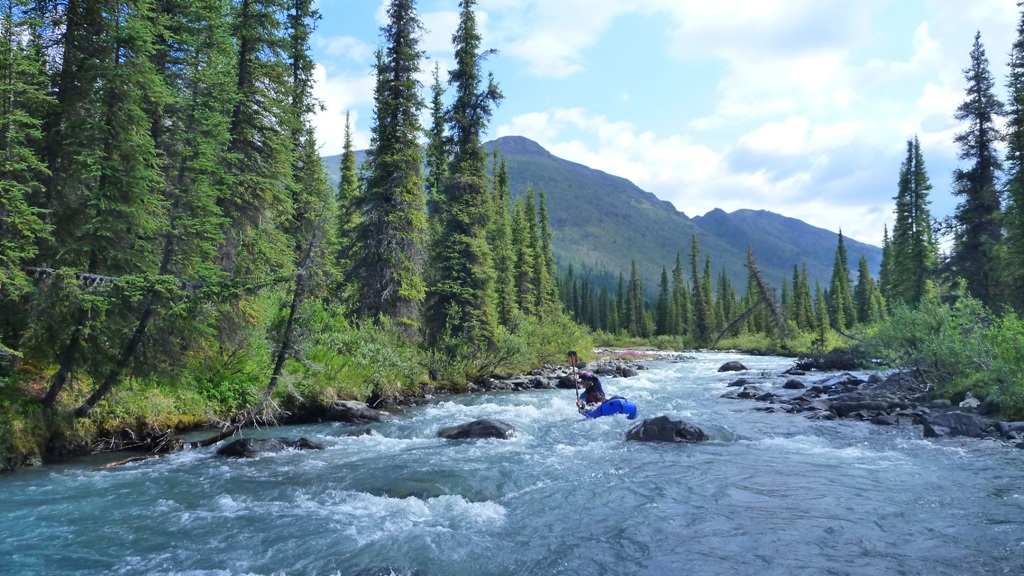 Pretty soon, the first canyon appeared and from then on, things got seriously fun. 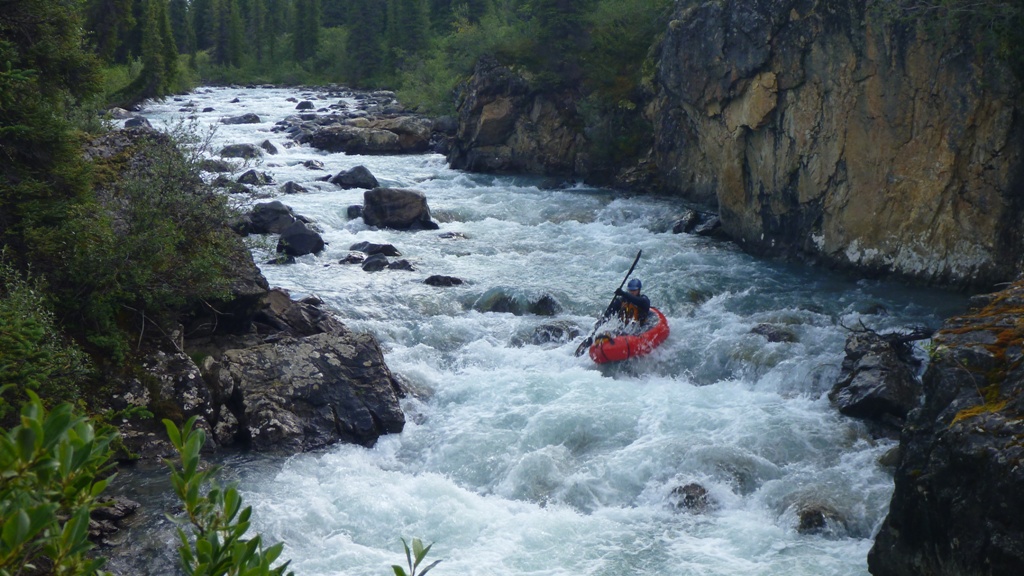 Dave doing his best to avoid Gin-Su-ing the stern of his boat. 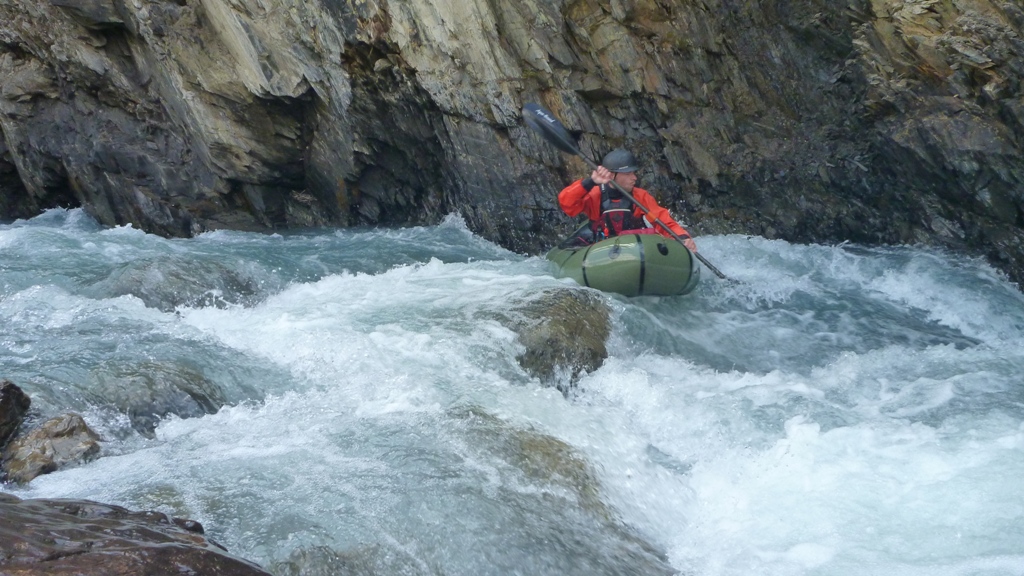 Soon we hit the first major canyon, and after a short scout, we discovered the first of three major waterfalls that had us looking for a portage route.  Fortunately, we found a good horse trail around the canyon, and although it put us in a bit further downstream than we would have liked, it beat thrashing about in the bush.
Of note, the first waterfall appears to be hard IV, but the next two drops are definitely class V. 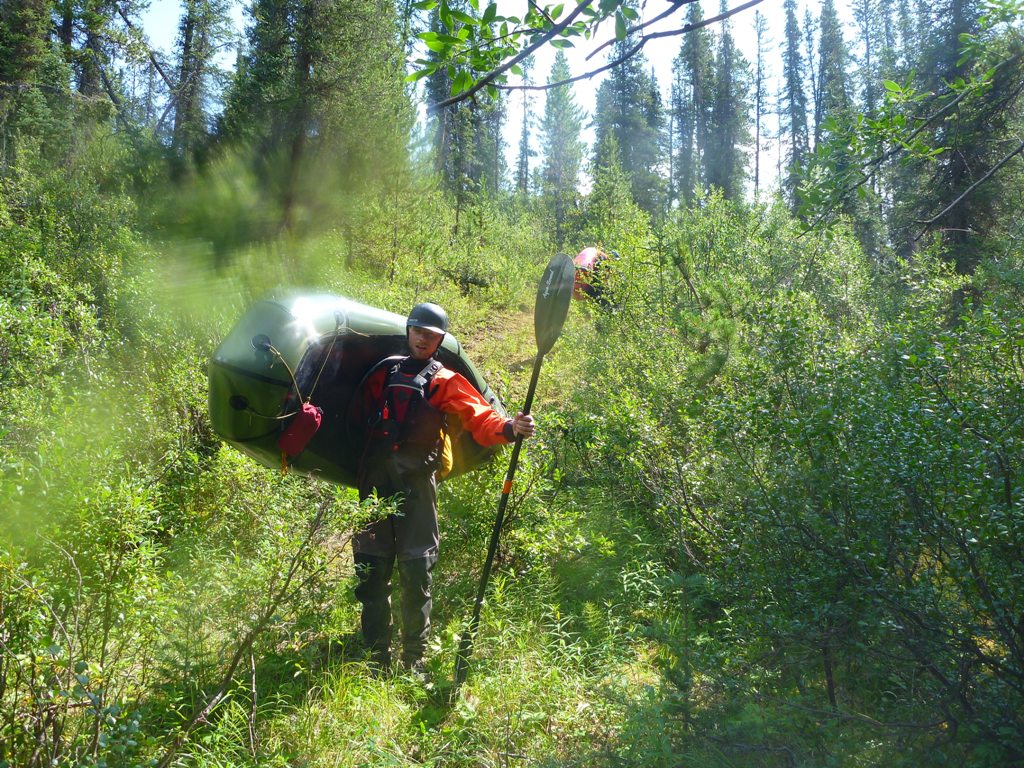 After sweating out a few gallons of water, we put back in at a nice pool and cruised off.  The river slows down below this canyon until hitting a small constriction which forms this nasty little class IV. 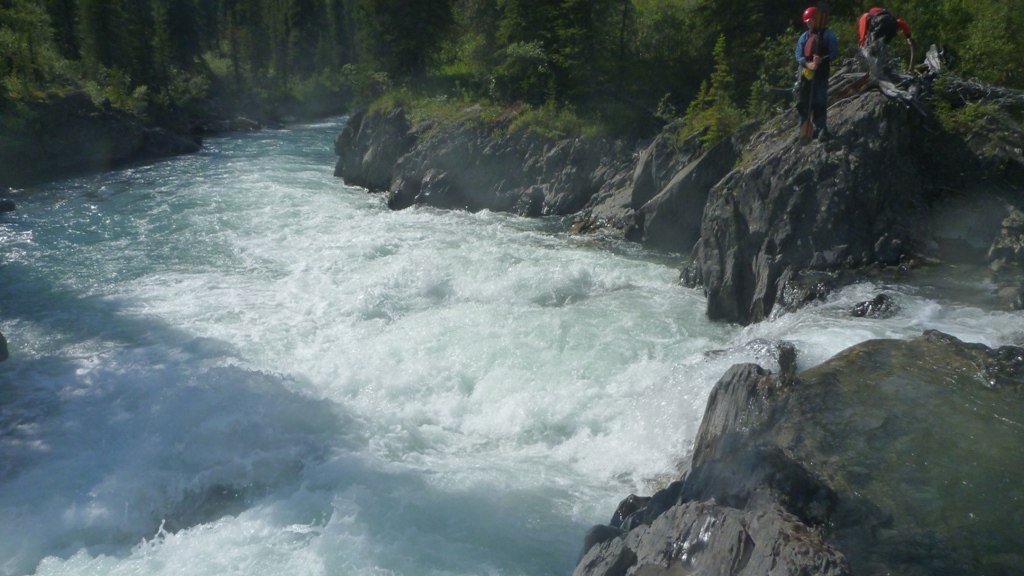 Paul B and Dylan eyed it like a couple of hungry dawgs for a bit, but ultimately decided that the big boil at the bottom only meant trouble.  It would have been fun to try in a non-wilderness setting, but you have to pick your battles out in the wilderness.
We found an A-1 grade camp just as the sun was staring to dip.  We cranked up a fire and settled down to some fat camp living. 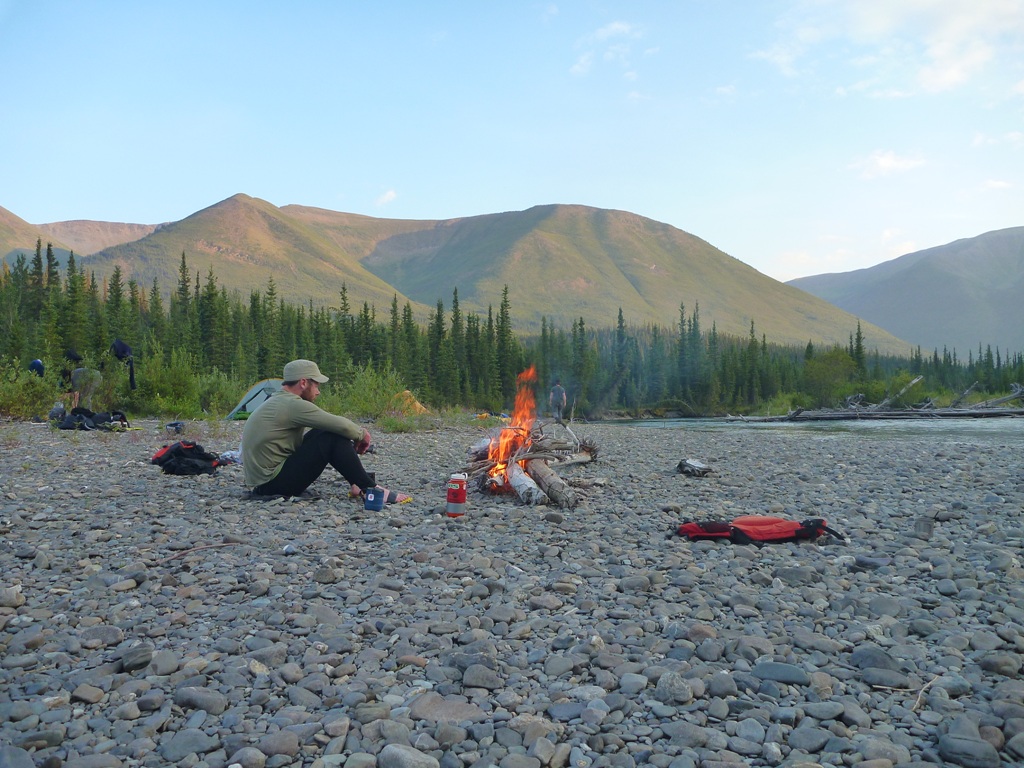 The first rainy day greeted us as we paddled off to the next big canyon.  We hit the entrance rapids, pulled out for a scout, and promptly made a ferry over to river right to air down for the big portage.  Just below the entrance rapids, the river jacks left into a big hole, and continues down into a sluice box waterfall.  Maybe someone will run it, not us.
It was an ugly portage, with the odd trace of an old horse trail, but it did the trick. 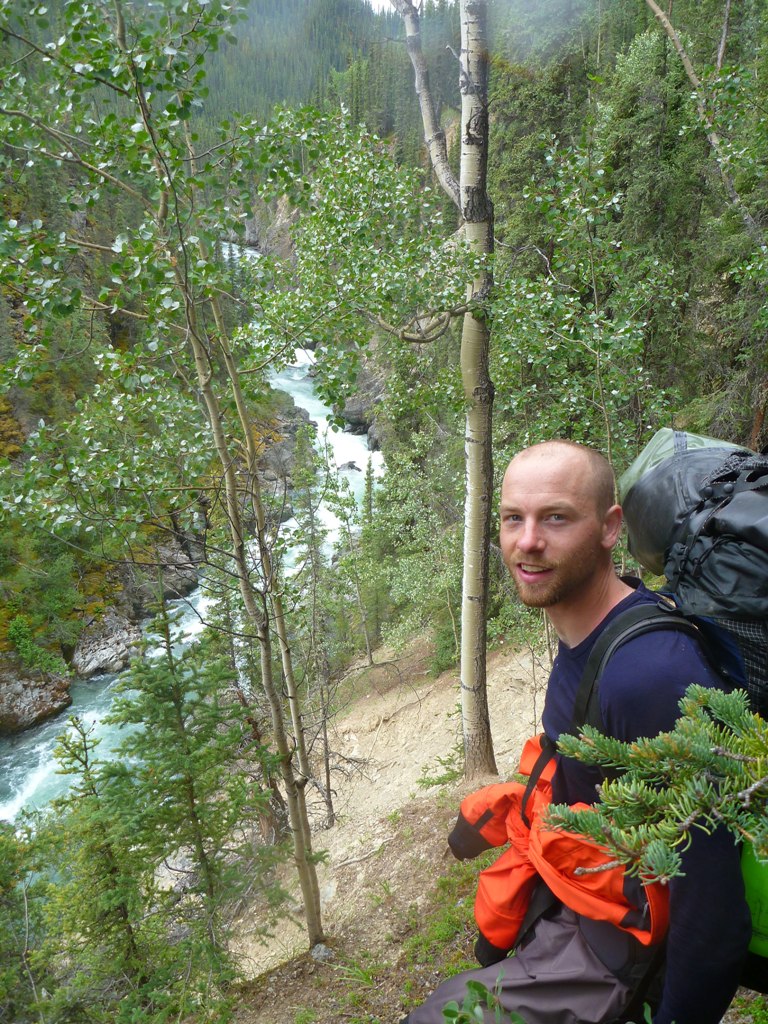 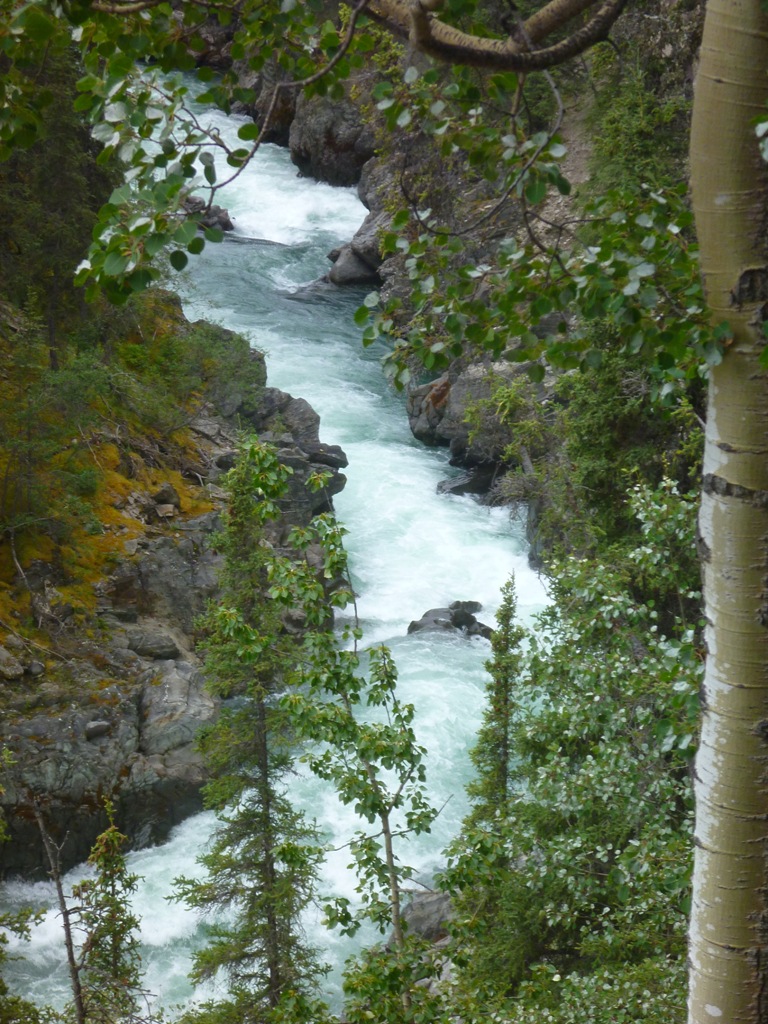 We got back into the river, again much lower than hoped.  Future parties could do a much shorter portage river left and come in just below the sluice pictured above. 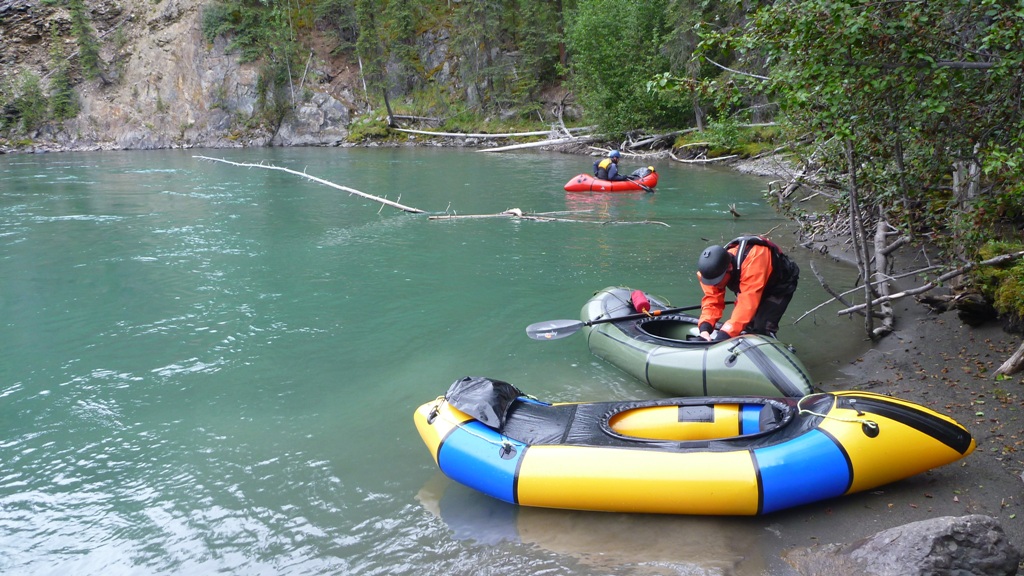 As we had gotten out of camp quite early, we finished the portage around noon, then kicked back for some fat floating.  Netson creek came in from the left and added a bunch more water to the Rabbit.  At the end of the day, we met the Gundahoo river and made the best camp yet. 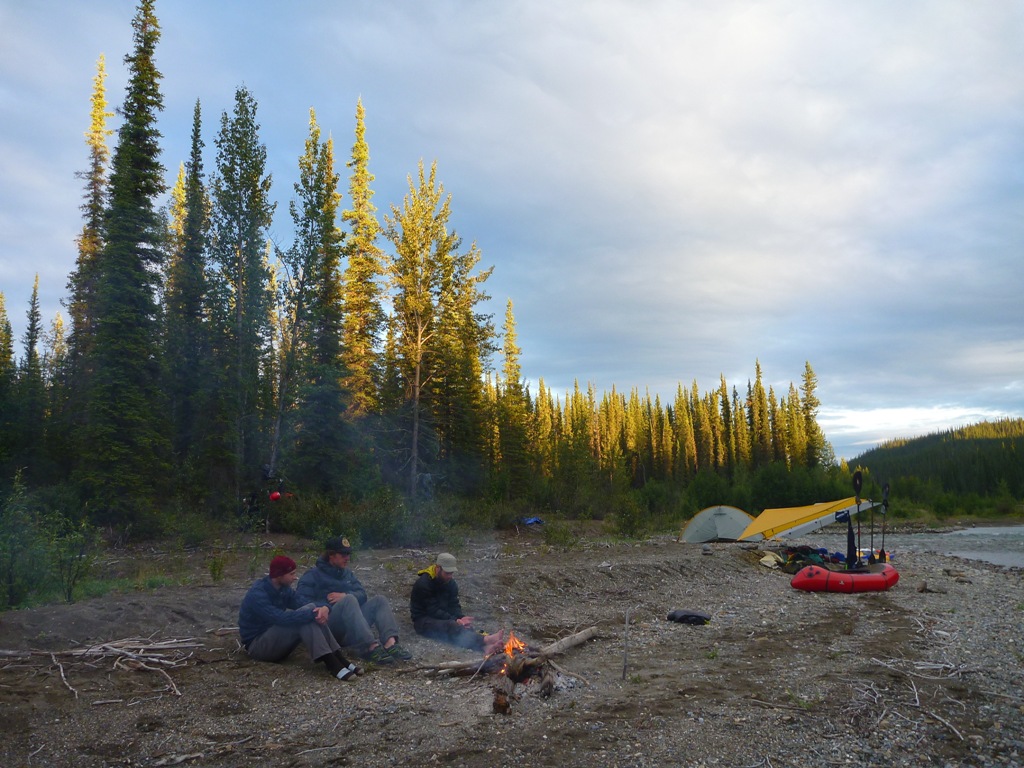 The cool thing about the Rabbit, well, there are lots of cool things, but it has zero evidence of other travelers. Owing to the canyons on its lower portion, this isn't a surprise. We did our best to make sure future travelers won't notice ours.
The Gundahoo adds a bunch more water to an already good sized river, and things felt much less creek like as we sped off early the next morning.  This section of river doesn't have many rapids worth noting.  One fun class III had an interesting split below a ledge that grabbed your attention for a moment or two.
We kept trying to find as good a camp as the previous nights, so we ended up paddling much later than we really wanted, and it was a hangry foursome that finally pitched camp on a Dryas flower flat at the tail end of an island.  A big fire and fat de-hys soon improved our outlooks.
The next day was the BIG day.  Previous trip reports had indicated a big canyon with no easy portage and at least one class IV rapid with many more IIIs.  The only trip report we found on the lower Rabbit was a canoe trip in the low water levels of fall, with the recommendation that others avoid the higher water levels of summer.  Our water level seemed average, but with no gauge on the Rabbit it was tough to tell. 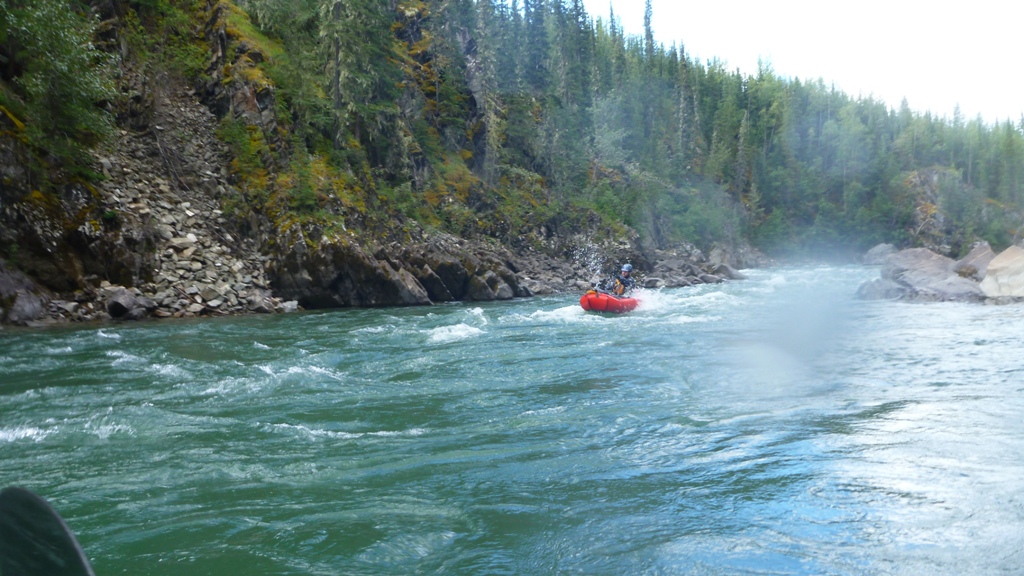 The rapids kept increasing in number and size until we finally hit the entrance to IT. 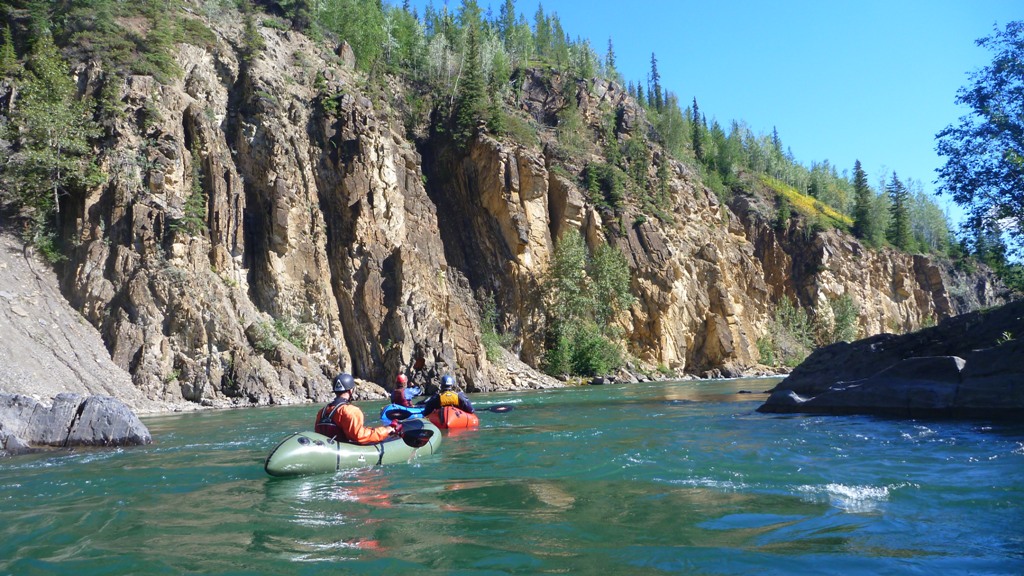 This canyon is one cool spot.  Amazing Turquoise water, Limestone walls, Tufa srpings, rapids!
As I pulled over to take a shot of Dylan, I sliced the bottom of my floor and seat.  A quick repair job had us back on the water in no time.
The big rapid finally came.  It was preceded by heaps and heaps of fun III's.  Great times!
We had a look from river right, made the plans, and I shot video of Dyland and Paul hitting it.  The following image is from the video (to come) and while poor, gives a good idea of it. 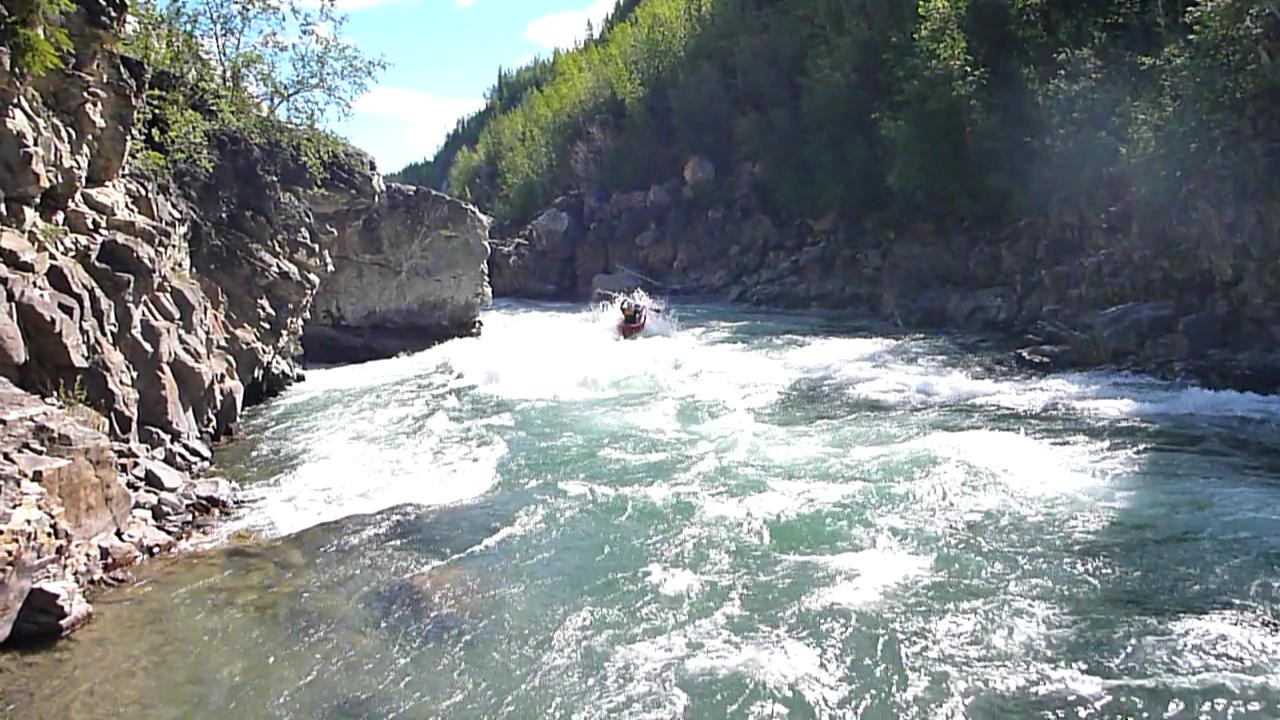 In the end is was pretty straight forward, and well had a great time running it.  The water below is very narrow and boily with lots of funny whirlpools and squirrely water.  All too soon we were down to the Liard. 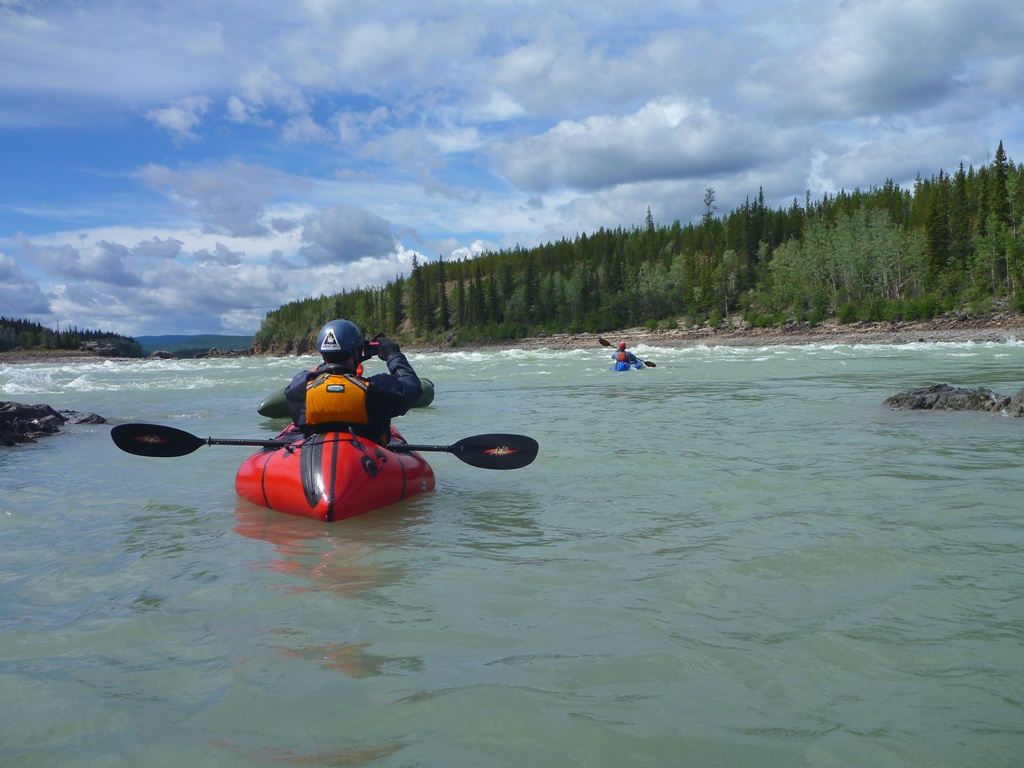 We ran a sneak line on river left through Whirlpool canyon and then ended up at Coal river lodge.  We took turns trying to hitch a ride, and Dave was finally successful.  We drank beer in the sun around a picnick table, shot the shit with the owners and locals, and generally enjoyed ourselves.  Dave returned from Muncho lake with the truck around 8, then we loaded up for the 7 hour drive back to Whitehorse showing up at 3 AM.
Thanks Dylan, Paul B and Dave for a fantastic adventure in amazing country.  A great team makes the trip.
Posted by Paul Christensen at 3:29 PM