While we had had glorious, hot sunny weather coming up the creeks, the day after the Flood creek thunder storm, the weather turned on us.

The clouds gathered, and the rain started up as we made our way down Thundercloud that evening, and by that night, it was socked in and raining hard.
We had blown up after the creek exited from the canyon, and we alternately dragged and floated down to where another tributary of Thundercloud creek joined its mineral stained waters with our clear tributaries. 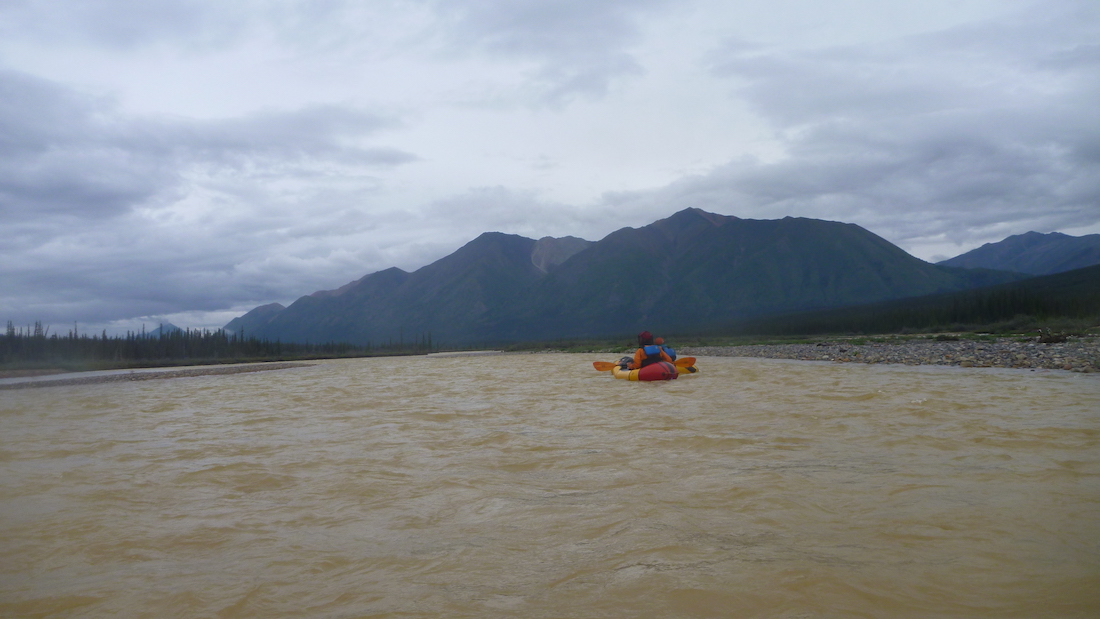 It had been interesting paddling that evening, as the tributaries channel was all over the place, including draining into two clear lakes that were seemingly without exit. 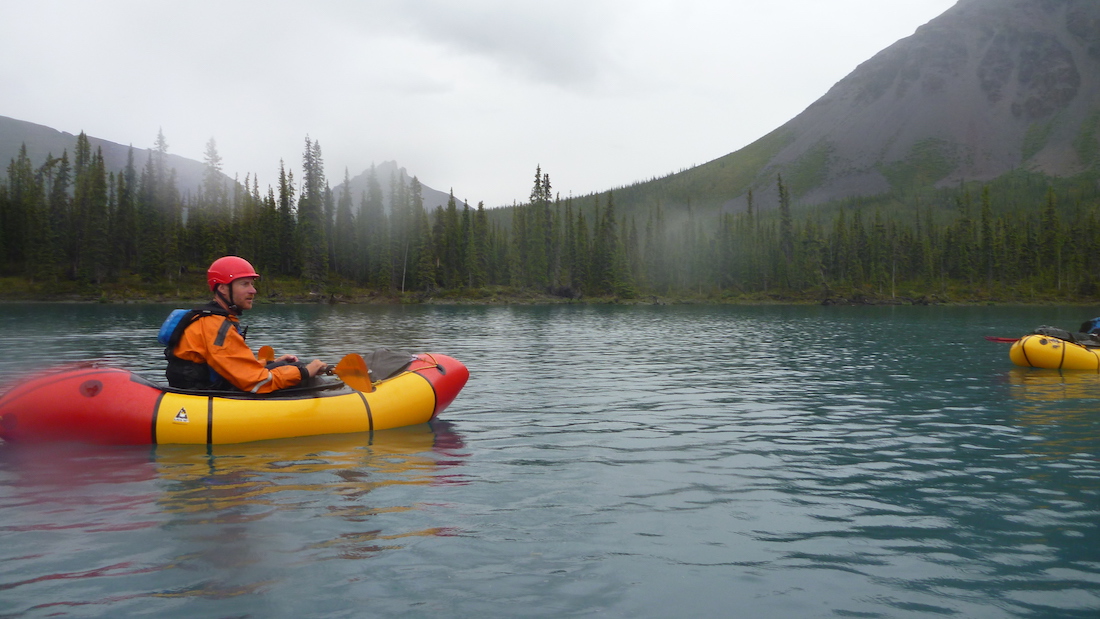 We finally found some clear-ish water and decent camp site around 8 PM where a side creek joined up.  There something about getting a raging fire going that can turn even a wet, muddy camp into something relatively comfortable.  We did just that. 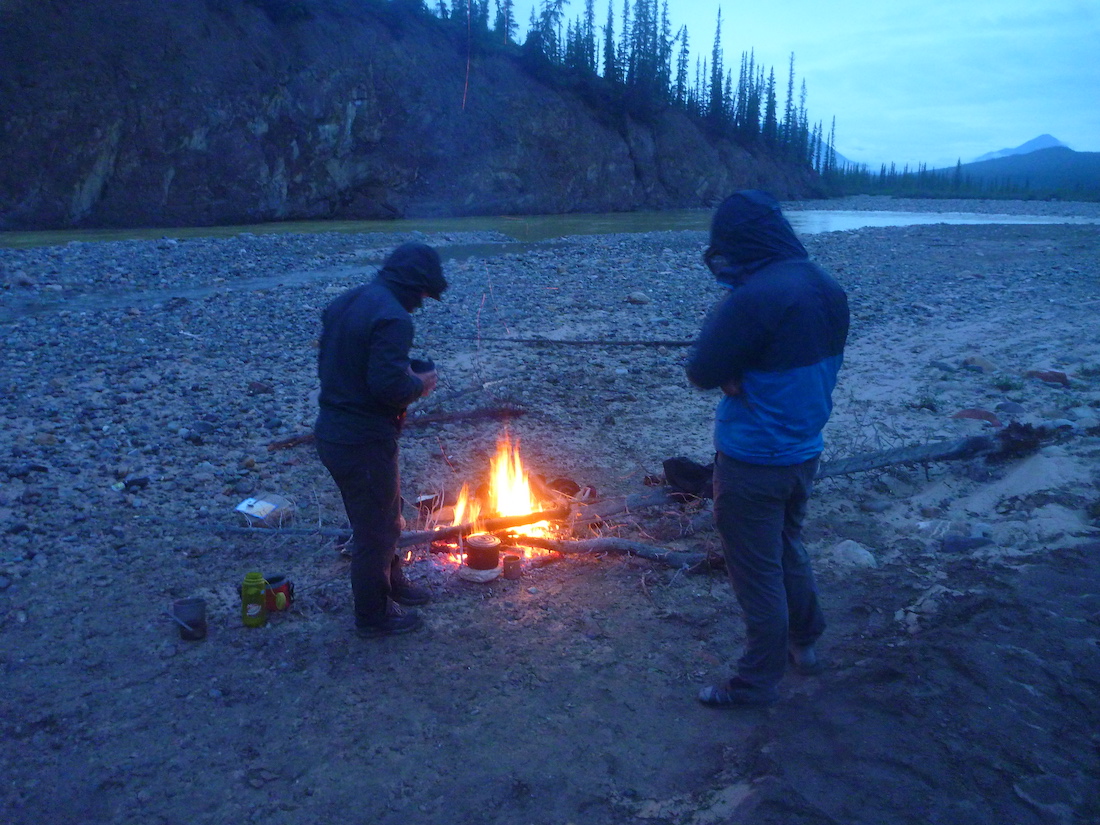 It poured all night, and the morning showed a river on the rise and the overflow channel from the creek that we were camped by starting to nudge at our campsite. 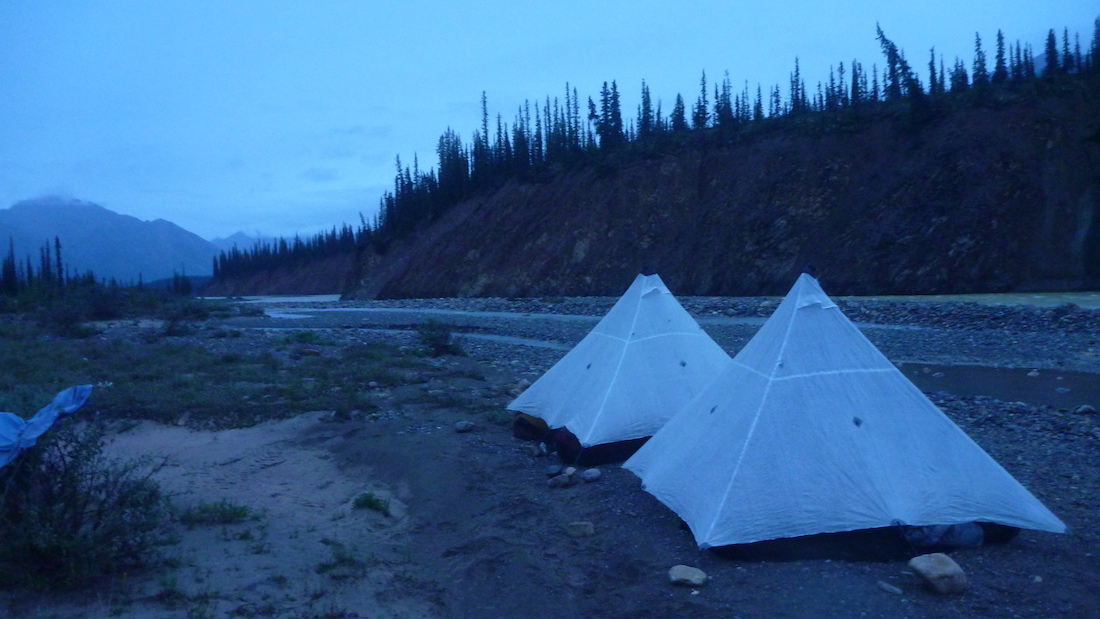 It rained all day, but a big fire and brew up in the afternoon raised our spirits. 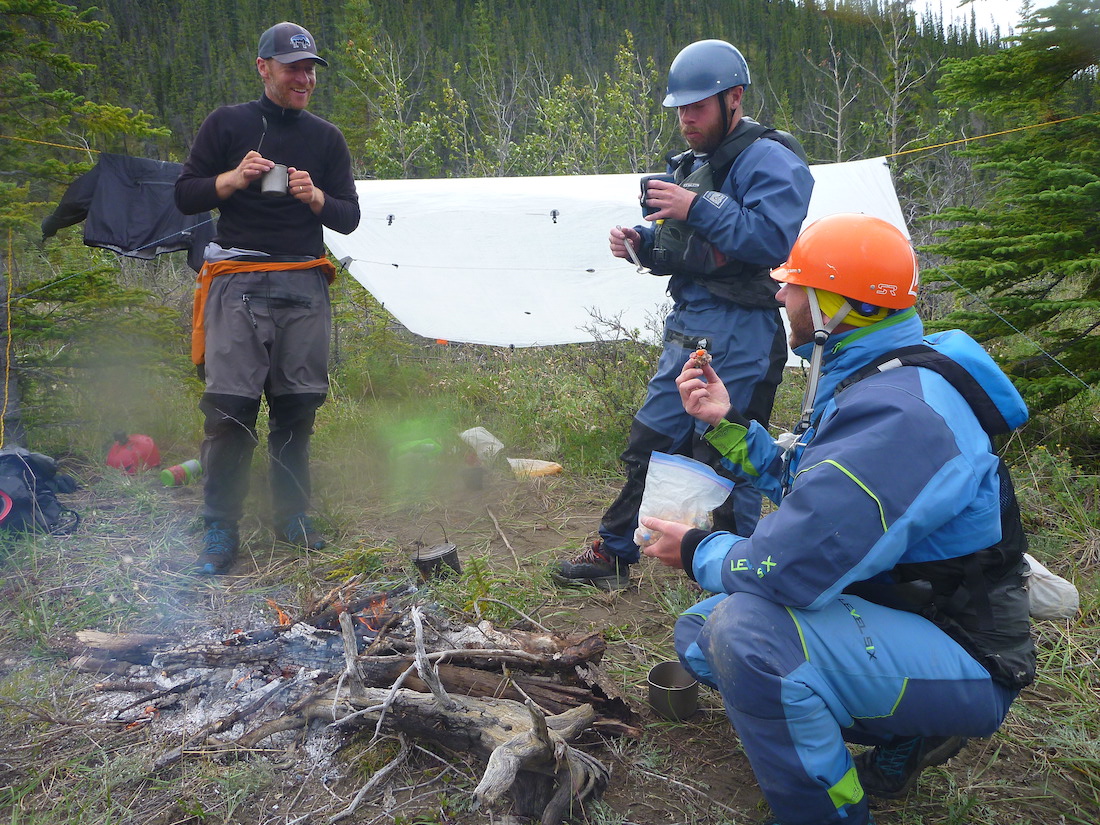 Interesting paddling through small canyons that looked threatening enough to require scouting made sure we never got bored. 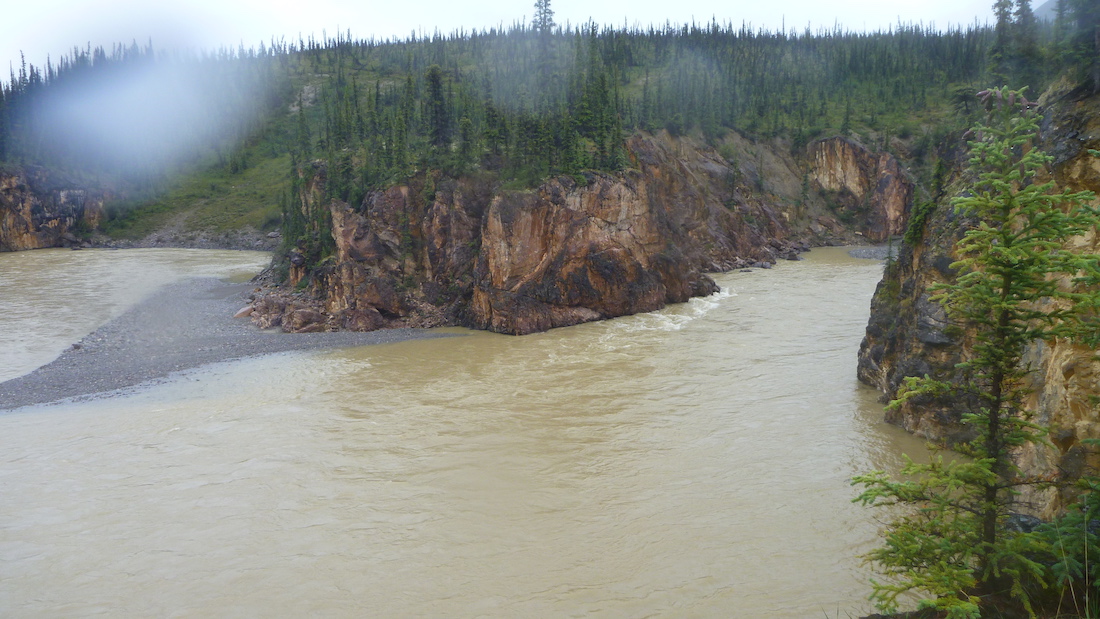 We joined the Silver Berry river, and the already high water levels grew yet again.
Later that day we finally made camp, tucked away in the trees along side a nice, clear creek.  It was a cold North wind, and we were grateful to be snugged away with a good fire.
The river continued to rise all night, and in the morning, it looked like the Mississippi. 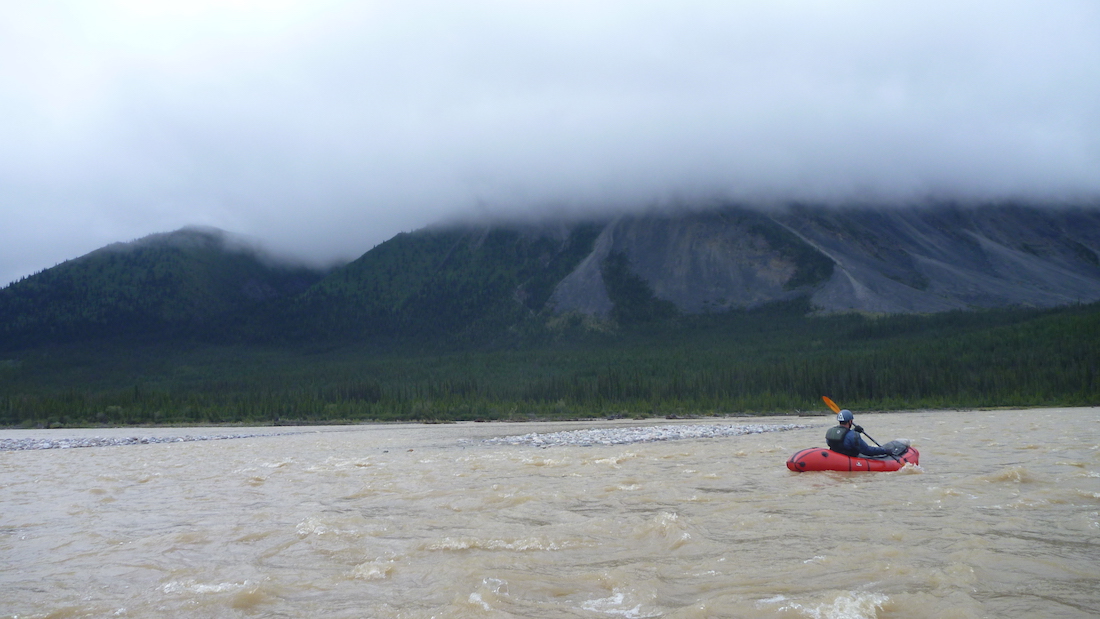 The common theme with the high water was that even benign river features ended up creating some pretty squirrelly features.  Later that morning we scouted a small canyon that ordinarily wouldn't have even slowed us down.  Large standing waves and weird eddy lines were the rule rather than the exception. 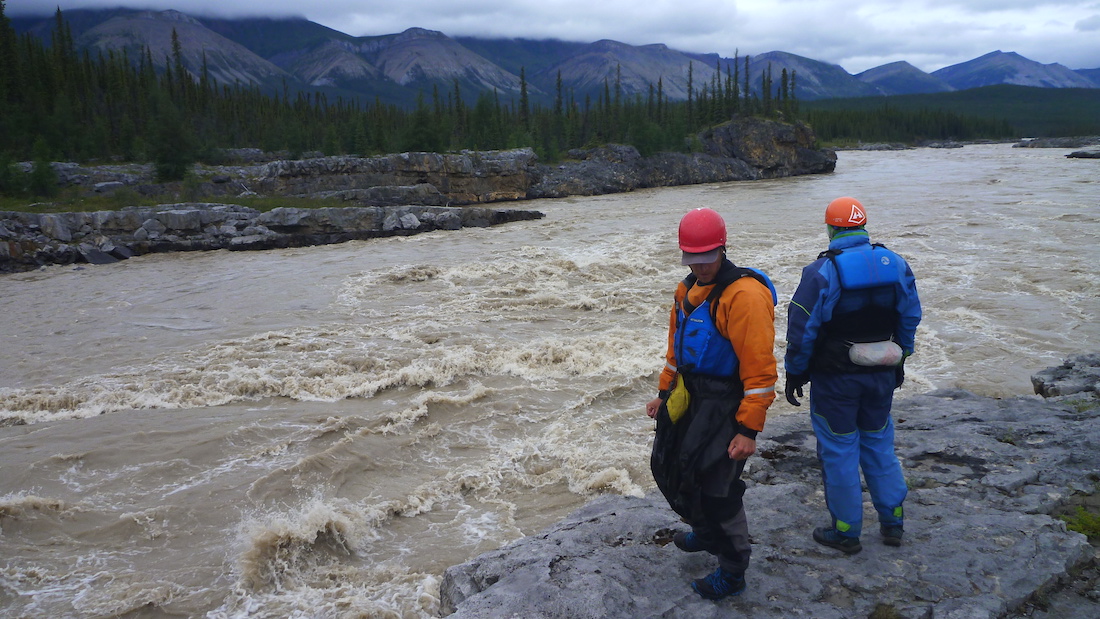 Yet another big river joined the fun, the Ravens Throat.
I can only imagine what the river would look like at normal levels, as the all the gravel bars were covered and side channels full.  We camped earlier than normal at the last likely looking spot just above a looming canyon.  The flood level conditions had us all on edge. 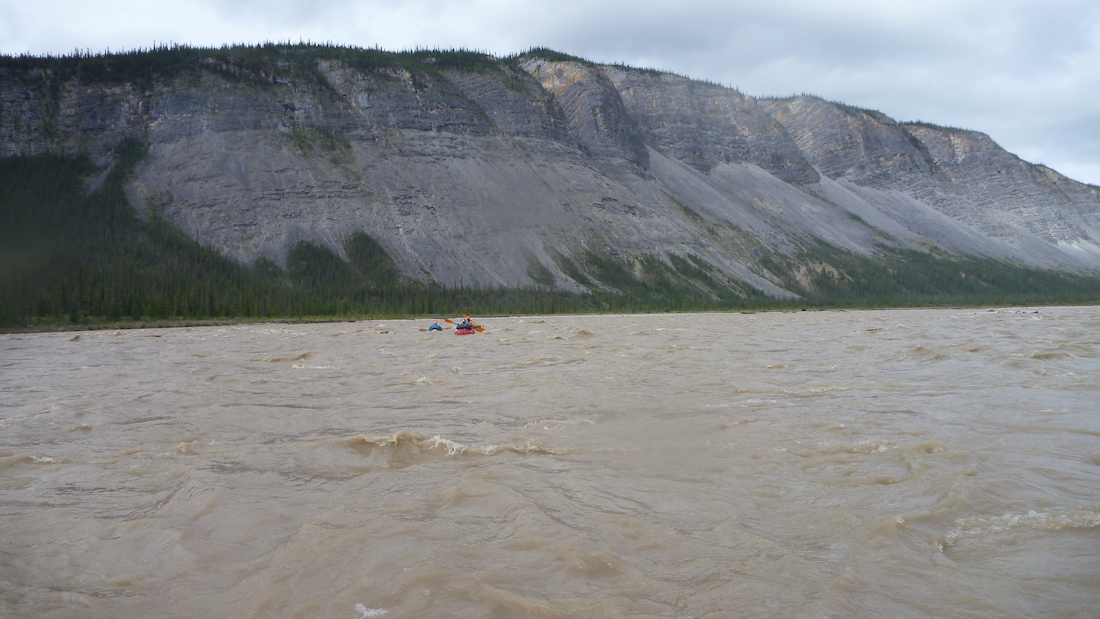 We went to bed in the drizzle, but it cleared overnight and an amazing blue bird day greeted us.
Its amazing how nice weather improves ones river outlook. 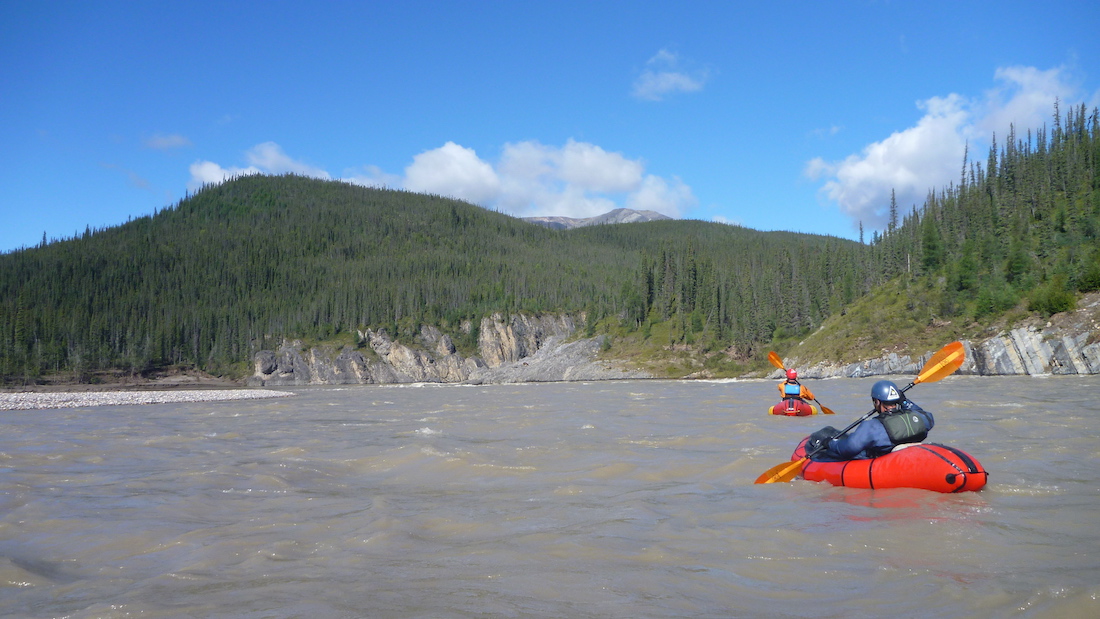 The looming canyon turned out to be straight forward, but another canyon just down stream turned out to have some nasty lurking whirlpools, and one formed up seemingly out of nowhere, and took Dylan out, or rather took him down.  I had the GoPro on and was able to catch its vicious attack.


The whirlpool that ate Dylan from Yukon Frolics on Vimeo. 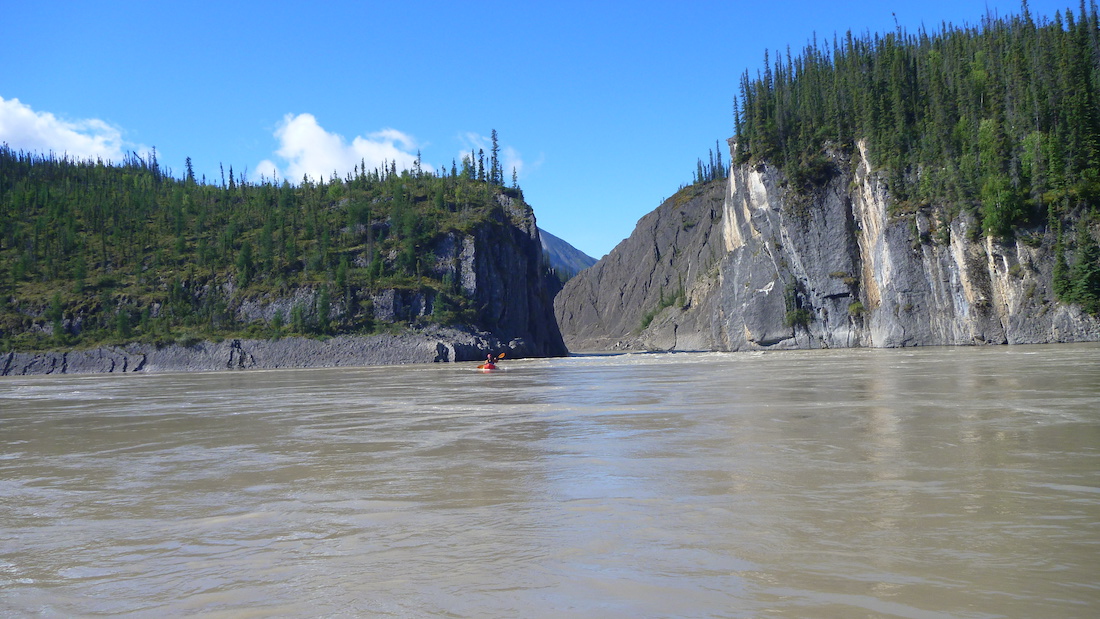 Just downstream, the Redstone joined up, and this would be the last major tributary until the Mackenzie.  Somehow, while reliving Dylans under-water tour, we missed the hotsprings.
We came across the last major canyon on the drainage, a formidable looking thing with all that water being funnelled into its open maw, then rapidly turning a 90 degree to who knows what (where?).
The others made a quick scout on river left to confirm the canyon, while scary looking, was straightforward.  We went into it, carefully skirting the huge eddy lines, and enjoyed the views.
The Redstone continues down through some very cool country, with high, steep hillsides and some tortured geology.  The water was very dirty, and finding clean water became our number one priority.
We made camp that night on a beautiful flat, well above the flood scoured and debris littered bars at river level.  We had a fantastic, bug free camp with an A-1 camp fire site.  No clean water,  but letting the silt settle out in our containers made the dirty brew pretty palatable. 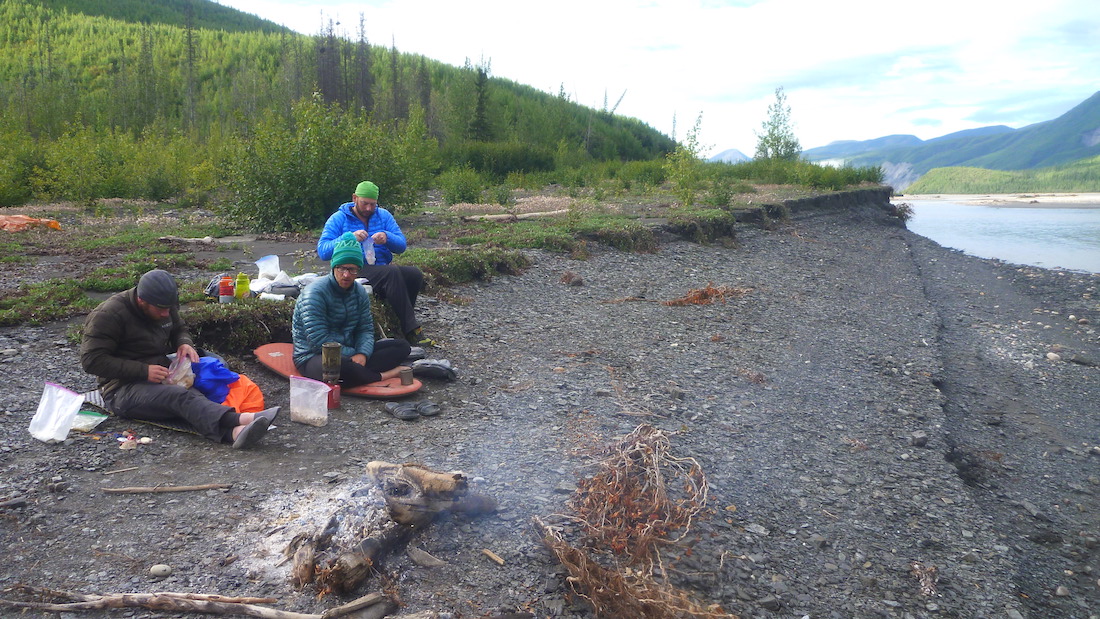 The river came down more than a foot that night, as measured by our sophisticated cairn measuring system. 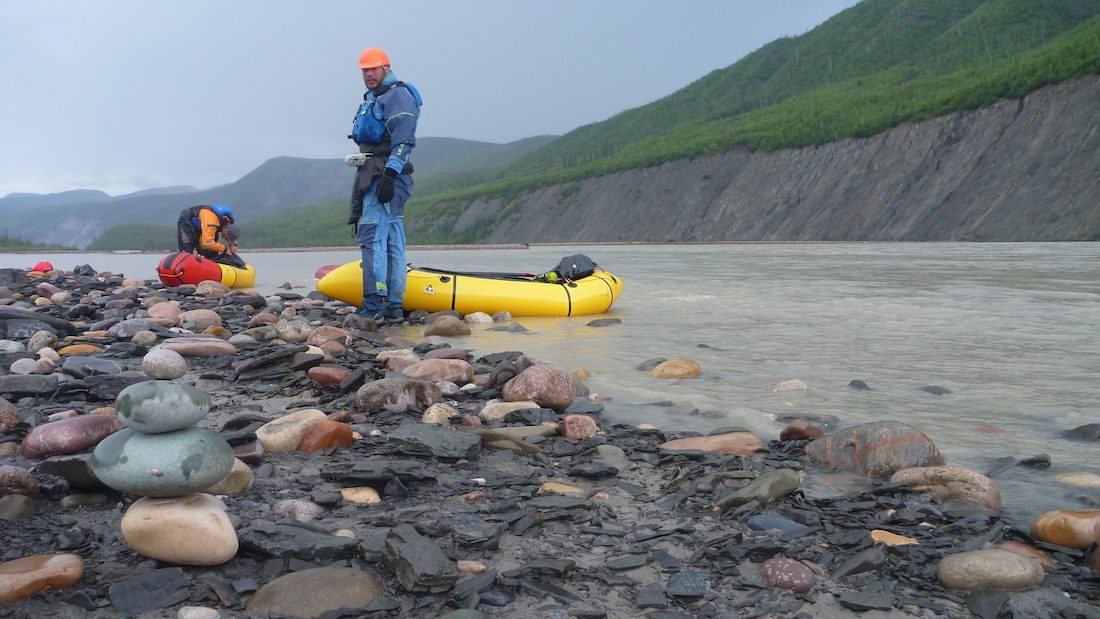 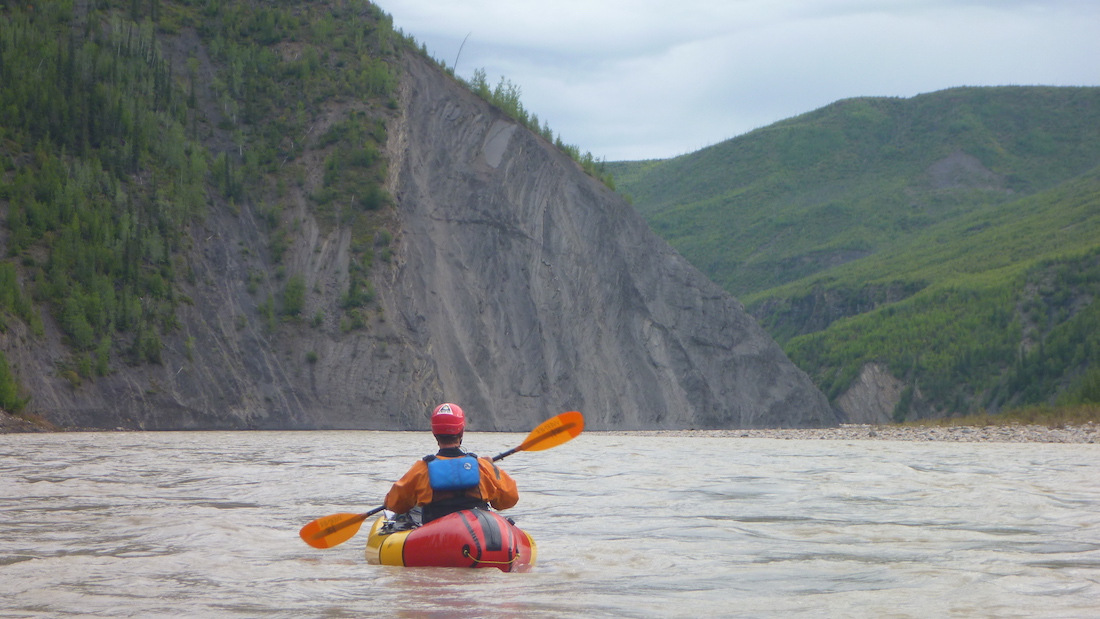 The next day, we put in a long one, arriving at the Mackenzie  in the soft evening light.  All the bars were covered in mud and debris from the flood event, but we managed to find a nice sandy bar complete with lots of firewood and a clear, gravel filtered pool right behind camp.
We lazed around the fire enjoying the late sunlight and warmth. 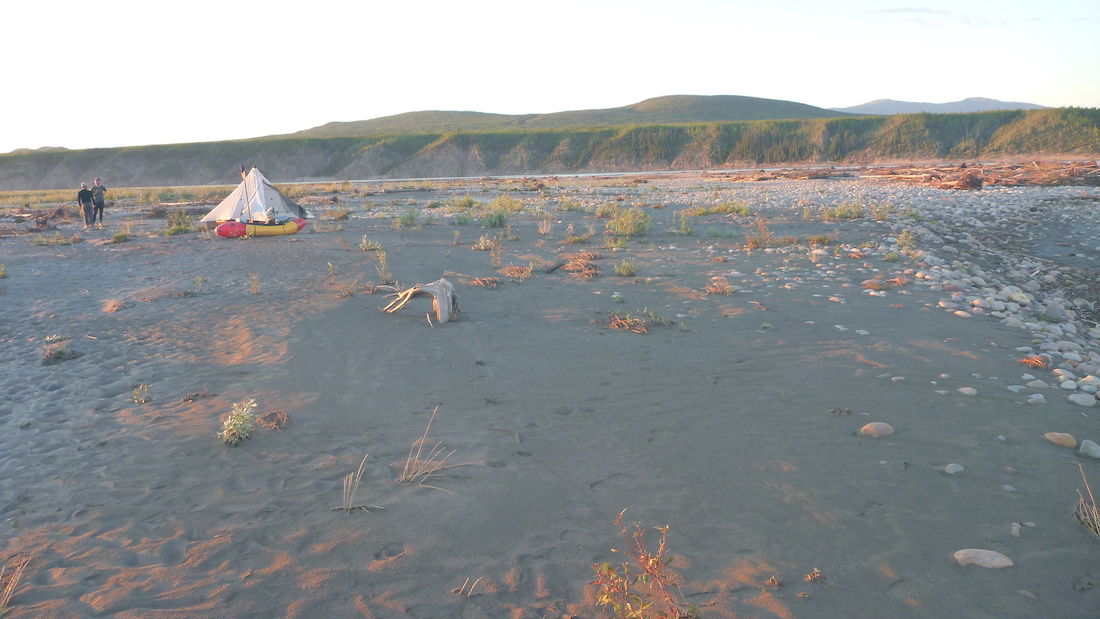 The heavy rains we had encountered earlier had brought the Redstone up approximately 4 meters, as measured at its recording station 65 km up from the Makenzie.  This flood level basically kicked us out of the mountains much quicker than we anticipated, allowing us to log 90-100 km days with not much effort.  The down side was dirty water and less camp site choices, but the easy floating was certainly enjoyed.
The final day dawned sunny and hot, and we hit the mighty Mac to put in a long 100 km day to reach Tulita.  The first 40 km down from the Redstone, the Mac cranks along at about 15 km/h or so, but by Old Fort Point, it slows and becomes little more than a huge lake for the final 60 km to Tulita.  Its not without current though, and with a helpful tail wind, we alternately paddled and floated to our final camp, a clean gravel flat just 5km above town. 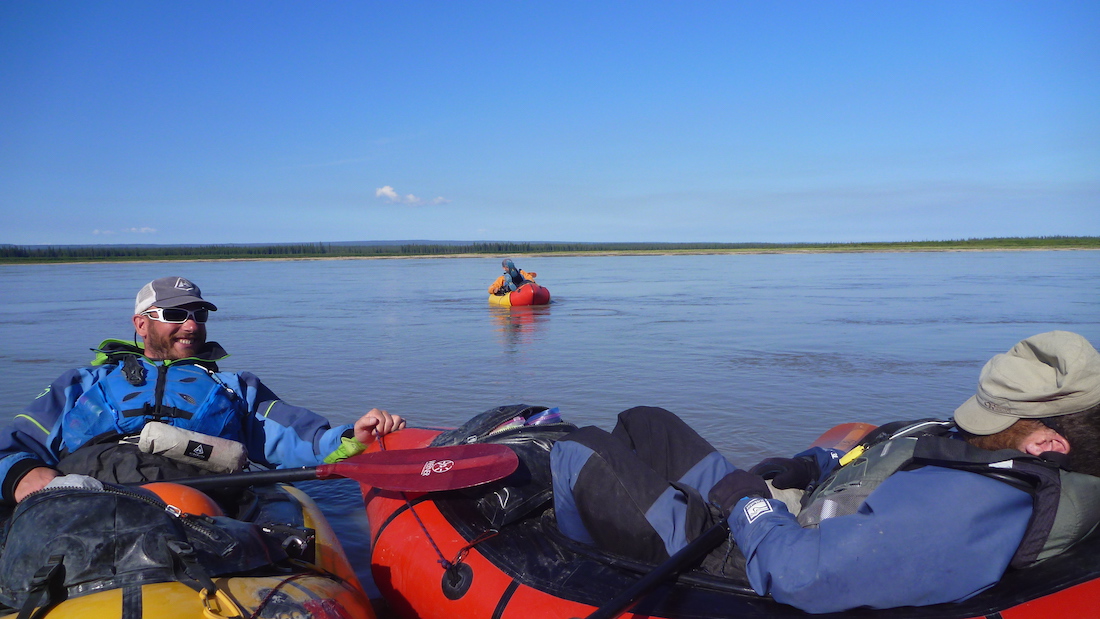 We bathed in the muddy, warm water, lounged in the late night sun and re-lived our journey. 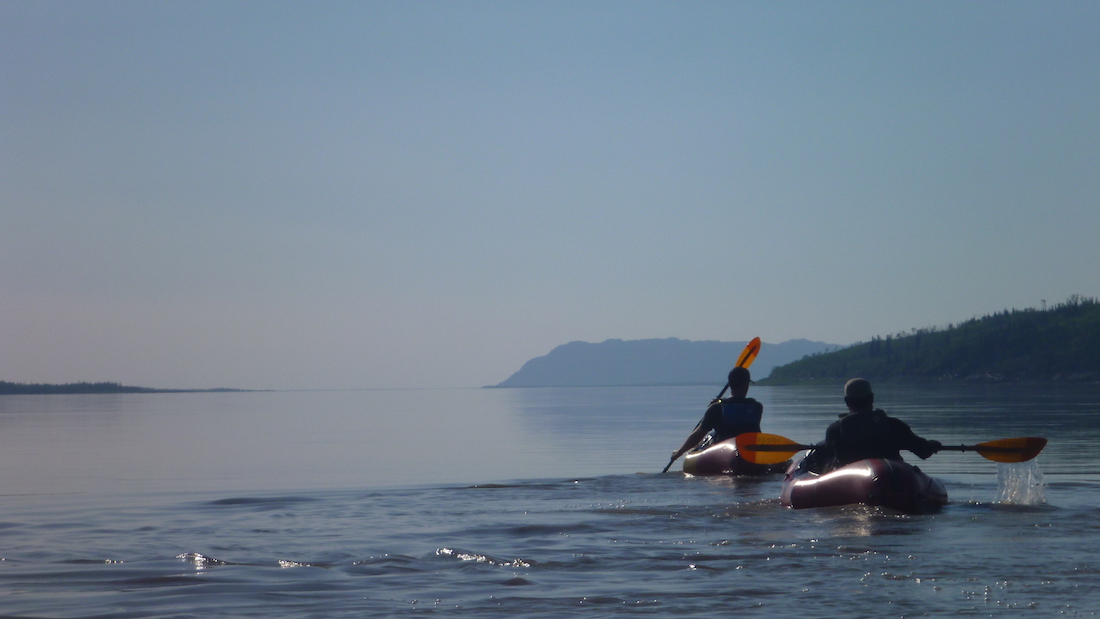 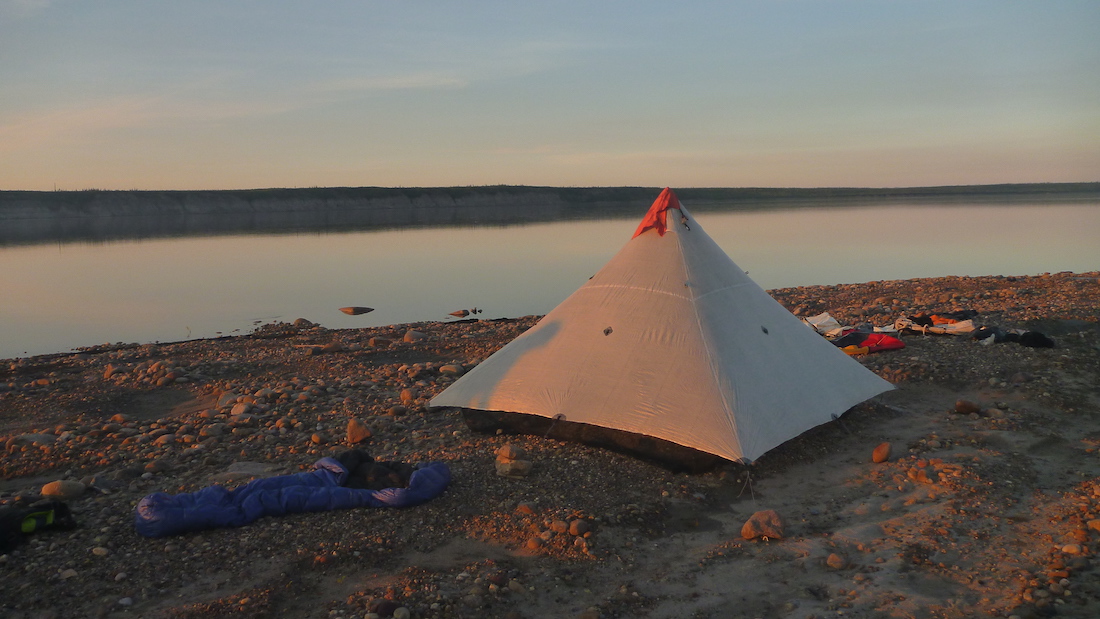 We phoned Tintina air in Whitehorse to let the manager know that we had arrived earlier than anticipated, and they were flexible enough to move our pick up date ahead, and said they would be there the next day at 3 pm.
Early the next morning we made the huge ferry across the Mac and arrived in our destination, where we promptly cleaned our boats, packed up and walked into town to the Northern Store, home of snacks and other much missed food stuffs.
We hung out in the gazebo, enjoying the shade (it was about 28 Celsius out) and chatting with the friendly locals, who were eager to know where we had been.  It was amazing that so many of them were quite familiar with the mountains and rivers we had just journeyed through.
Our Piper Navajo showed up promptly at 3pm, and 2 hours later, we were home in Whitehorse.  We determined that out of all the options, chartering a plane direct from home was the most cost effective, not to mention easiest method of getting home again.
The days after a long trip such as this always involve a certain degree of sadness.  Sadness in that the easy routine of breaking camp and moving with your friends towards a common yet distant goal is replaced with the workaday routine.
I guess ultimately, if pressed, the reason one takes on these longer trips is to put things into perspective.  How much do you really need?  Whats important in your life?  How important friends are.
Thanks Dylan, Sky and Paul for helping put things into perspective.

Posted by Paul Christensen at 1:56 PM